Did This Woman Go Too Far In Calling The Police On Her Fiance?

I think most of us figure that once you’ve agreed to spend your life with another person, you’re invested enough in their future and well-being that you’d do whatever you could to you know. Not send them to jail.

This OP found herself in a sticky situation over her car, though, and is wondering if she might not have gone too far.

My fiance (28M) and I (30F) have been together for 3 years, I used to live close to work and used public transportation but after I moved in to his house which is hours away from work I bought myself a car since I’m a nurse and also since there isn’t any hospitals close to where we live that I could transfer to.

My fiance’s car hasn’t been working for close to 2 months now, It requires so much money to get it fixed and he refused my financial help when I offered it.

Her fiance sometimes asks to use her car for errands, but on New Year’s Eve, he asked to take it to go out with his friends.

She told him no, because she had a shift at work and thought it would be hard to find someone to switch at late notice.

Instead, he would ask to use my car every now and then and I agreed as long as it’s when I’m not working and also, since he only uses it for trips to the supermarket etc.

On new years eve, he told me he wanted to use my car to go hang out with his friends and celebrate but I declined because I had to cover a night shift and needed my car to travel to work.

He insisted and even suggested I take the night off or swap shifts with another nurse but I couldn’t do that last minute.

On the day, she found out that he’d taken the car anyway without asking and she had no way to get to work.

When she got ahold of his friends she said that she was going to call the police if he didn’t bring it back, but he dismissed the threat.

I thought he dropped it then but when I went into the shower and got out I couldn’t find him nor my car, I freaked out and started calling for half an hour but he didn’t answer me, I tried again til one of his friends picked up, I demanded he give the phone to my fiance but he said they were out and confirmed that he took my car and told me that my fiance said that it’s better that I skip my shift and he’ll be back with my car later.

I couldn’t take it I felt so enraged I had my fiance on the phone telling him I did not consent for him to take my car to go hang out with friends and said I’d call the police to get it back if he refused to come back with it, but he didn’t take me seriously so I ended up calling the police and he and his friends were picked up at the bar where they were hanging out, then were taken to the police department.

She followed through, getting her car back in time to go to work and him and his friends cooling their heels in jail for a few hours.

I got my car from there and still went to my shift, my fiance was let go hours after I left and he blew up my phone with missed calls and texts about how I was out of my mind to call the police on him and put him in this situation.

He’s angry and thinks she overreacted (and embarrassed him) but she’s not sure what else she could have done.

I did not respond but when I got off work the next day we got into an argument and he said he couldn’t believe I’d do this to him but I told him he made me do this to which he responded that I was petty and callous because not only did I ruin his new years celebration, but all his friends aren’t speaking to him after I put them in this situation as well and he then kept giving me silence about it.

I did consider this a form of theft especially since he went behind my back after getting a “NO” from me, but he was shocked that I’d even imply that he was a thief and said what’s yours is mine and vice versa so I shouldn’t be using the terms “theft and stealing”.

Reddit is definitely coming down on one side here – read on to find out which one!

The top comment says not only is she not the AH here, but they hope she realizes she’s also way too good for this jerk and moves on soon. 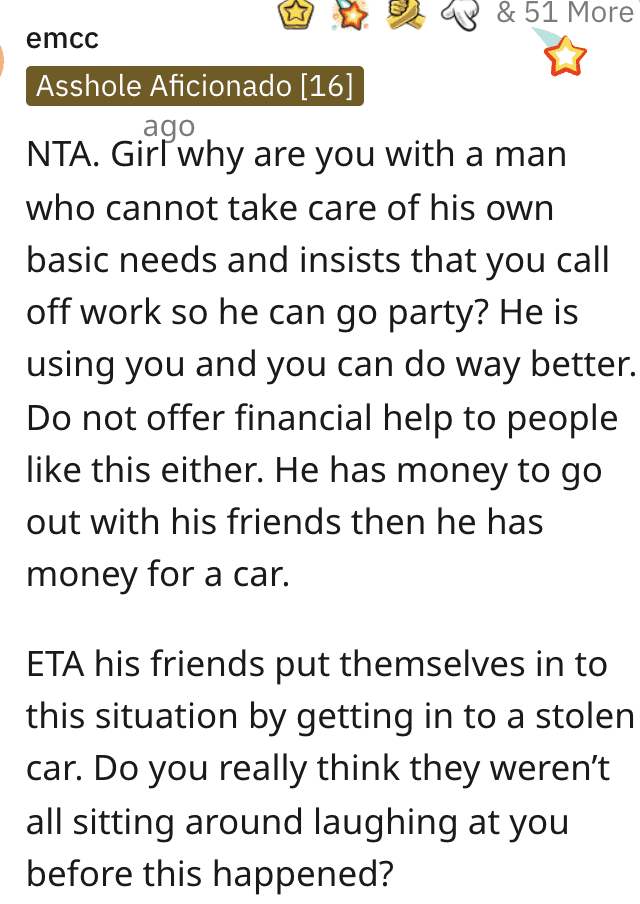 When people show you who they are, believe them the first time. 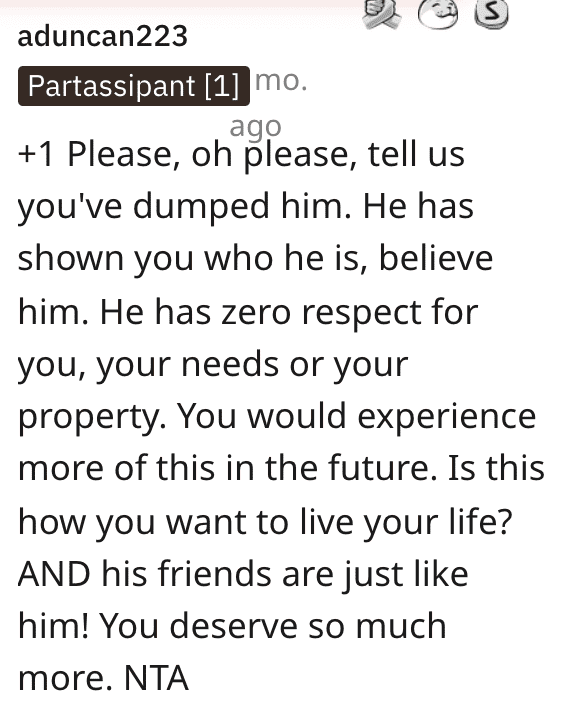 How could he consider his night out (that he could have gotten a ride to) more important than a scheduled work shift? 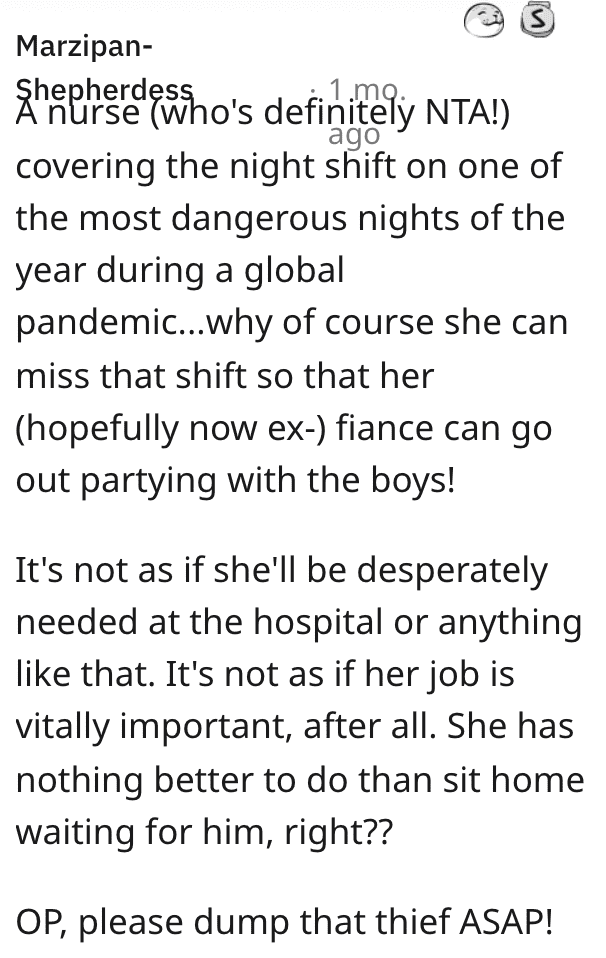 Every single one of his actions was extremely irresponsible. 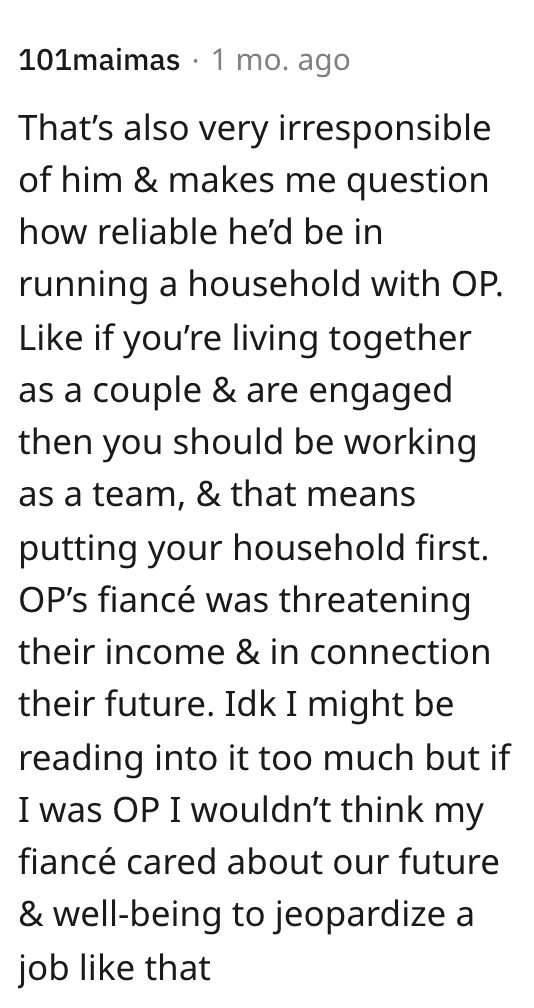 Just plain selfish AND it could have had a really negative impact on her, too. 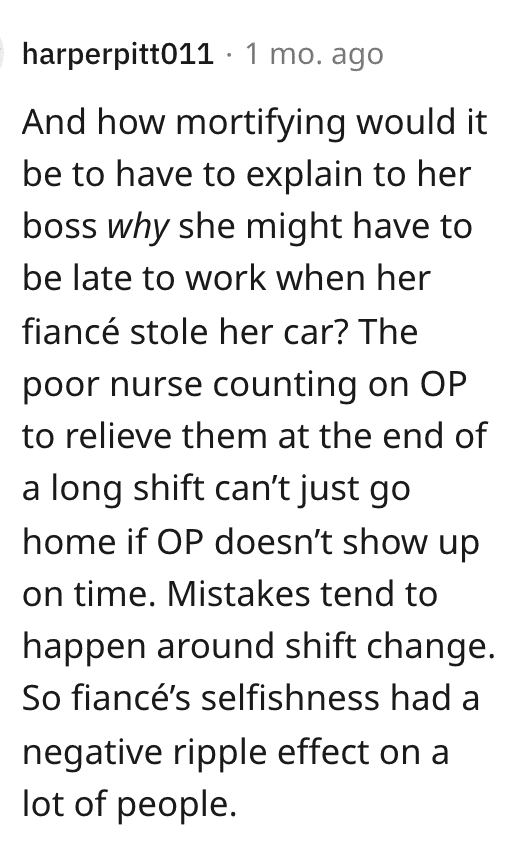 Y’all I cannot with this dude. How did he think this was going to turn out?

What would you have done in her situation? Would you have been bold enough to call the police? Tell us why or why not in the comments!