Did This Aunt Go Too Far When She Filed A Police Report On Her Nephew?

There are different rules sometimes when we’re dealing with family. That goes double when that family is a minor, but should that really be true in every situation?

That’s the question this person was asking after learning that their nephew stole over $10k from an account meant to support their ailing mother.

The set of three siblings is handling the affairs of their mother, who is suffering from Alzheimer’s. She’s still at home so they have to make sure to pay a caregiver, shop for groceries, check on her, pick up medications, etc.

My mom has late stage Alzheimer’s and has been unable to manage her money and needs around the clock care. It probably would be safer to put her in a nursing home but she made us promise to only do that as a last resort. Thankfully she had a lot of investments and savings from my dad before he passed so we can get her a hired personal carer in her own home.

Since only one of the siblings lives nearby, she takes care of all of the daily tasks and the other two pay her a stipend.

My sister is the one who lives the closest and visits her often so she handles mom’s finances.

We give my sister $200/month each for her to run errands and help look after mom since we both live out of state.

One of the siblings noticed that cash was being withdrawn from the bank account. They asked the closest sister about it, but she was surprised. She never got cash out of the account, only used it for groceries, bills, etc.

It didn’t take long to discover that the ATM being used was next to her teenage son’s school.

My other sister called me to tell me there’s been a lot of cash withdrawals recently on my mom’s card. I check and there’s nearly a years worth of $3-400s withdrawn.

We call my sister who is handling finances and she is confused and says she never takes out any cash she only pays bills with the bank card and uses cc for the groceries etc. She freezes the bank card and I take a red eye over.

Long story short we asked the bank where the atm withdrawal happened. My sister looks shocked when she Googles the location and realizes it’s close to her son’s school.

They questioned him about it and he eventually admitted he’d been lying about having a job and was instead withdrawing money from his grandmother’s account – to the tune of nearly $15k at that point.

We waited until the son got home and asked him where he worked and he said a local restaurant. We said we would like to go with him to the restaurant to confirm he works there and he got really panicked and said the management just changed so they wouldn’t know him.I ask for his paycheck and finally he gives up and admits he doesn’t have a job.

My sister asked him where the money for the new stuff he bought home comes from and he admits he steals the bank card to make cash withdraws.

I asked him where he got the pin and my sister confessed she writes her pins on sticky notes so she doesn’t forget them 🤦‍♂️.

I take the bank statements and calculate out that he owns $14,308.

OP insisted the son (or his mother) return the money immediately or a police report will be filed. Their sister doesn’t want this to happen because he’s just a kid and it could ruin his future, but OP isn’t convinced.

I told him he has to pay it back now or I’m filing a police report on him for theft and my sister begs me not to saying if he has anything on his record he might not get into college. I told her I won’t if she pays it but she said she’s struggling and doesn’t have the money(she’s a single mother).

I told her that isn’t good enough and she complains her son is only 16 and doesn’t know any better. I told her they won’t put a 16 year old in jail but he might do it again when he’s older so it’s better to learn his lesson now.

She said we can just take that out of what her son’s inheritance would be from our mom and I yell at her that if our mom was in a state to judge she would write him out of her will for this.

After contacting a lawyer, a police report sans nephew’s name (for now) was filed.  OP believes there needs to be consequences for the kid, and also that they might need that money one day in the event their mother needs more intensive care.

I call up my lawyer and ask what I should do and he suggests filing a police report but not including my nephew’s name just yet. I did just that and my sister is screaming at me that I’m ruining her son’s life by involving the police and he’s only a kid.

I’m not happy about it but at 16 if he’s stealing from his own grandma who looked after him when his mom was sick I can’t imagine what he’s going to do when he’s older.

Were they wrong? Reddit’s jumping on the judgement train below!

The top comment is from a professional who agrees that consequences are necessary. 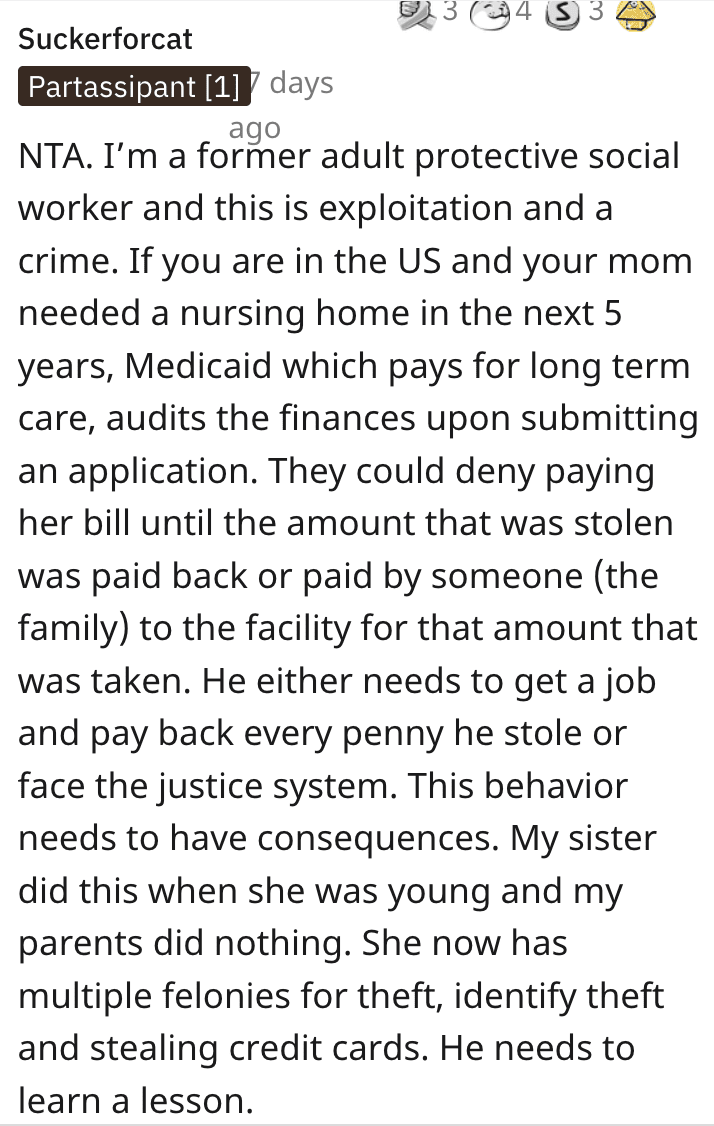 Plenty of people pointed out that this is not exactly petty theft. 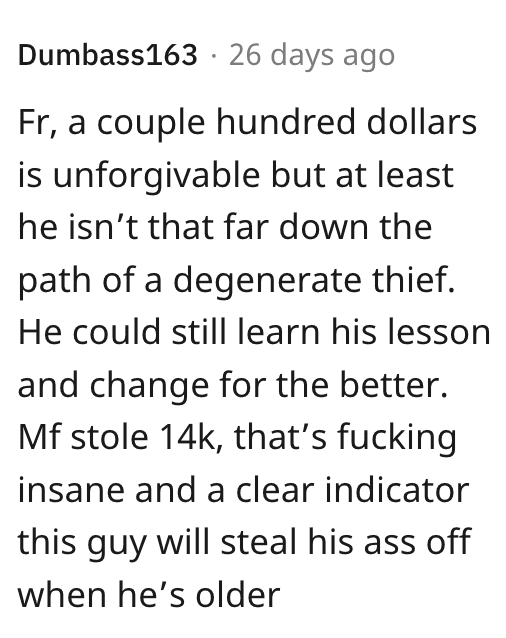 There could be even more going on that could mean the nephew needs help, not adults acting like he stole a cookie. 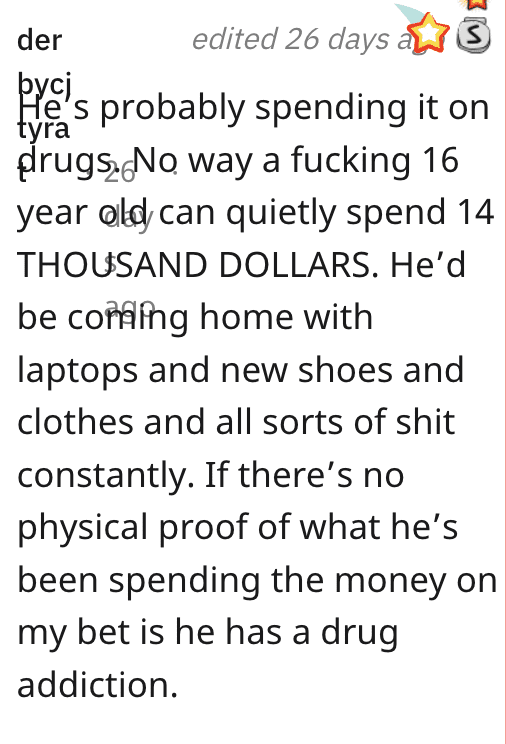 They need to make sure the son really understands what he’s done. 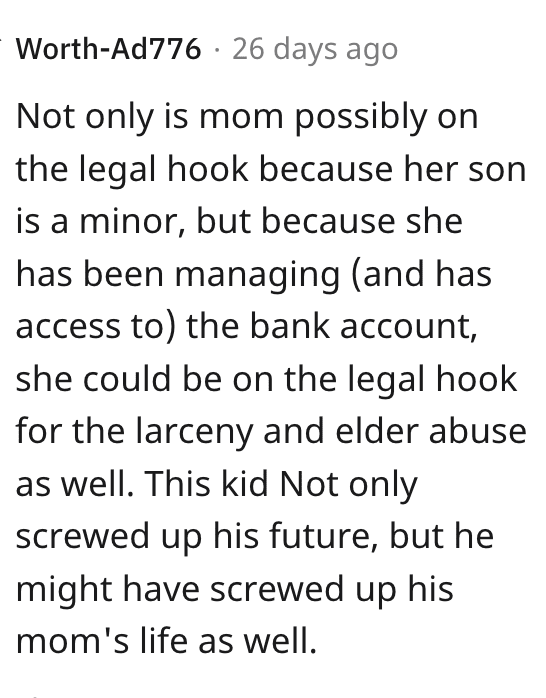 Long story short, but being the responsible adult in the room isn’t always easy. 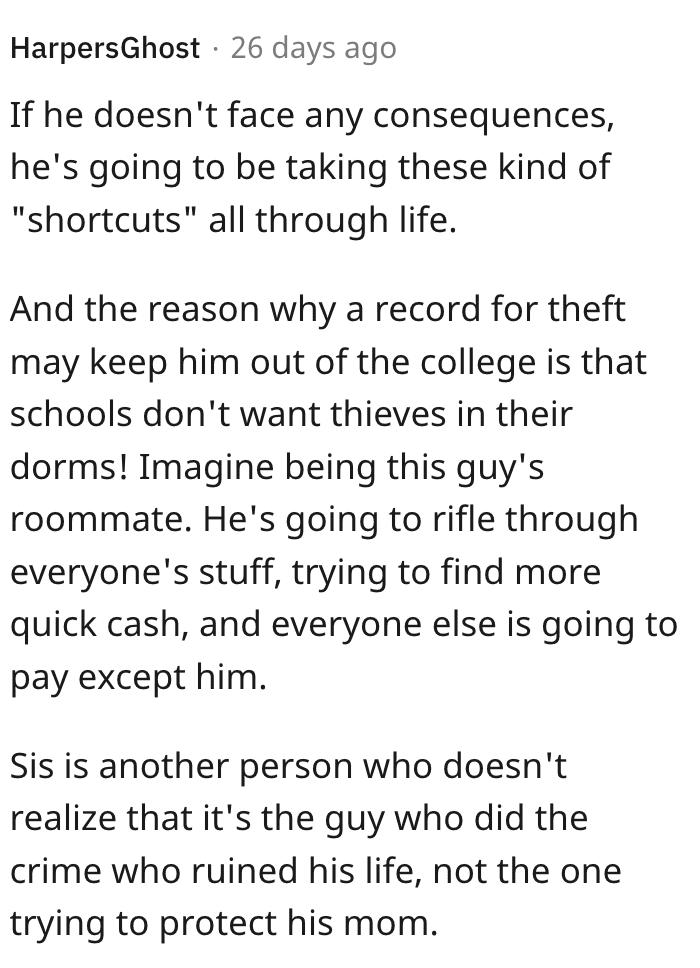 Kids need consequences, and raising them means letting them face those consequences even when they’re really, really tough.

What would you have done? Give it to us straight in the comments!

She Shaved Her Head Before Her Cousin’s Wedding. Was She Wrong?