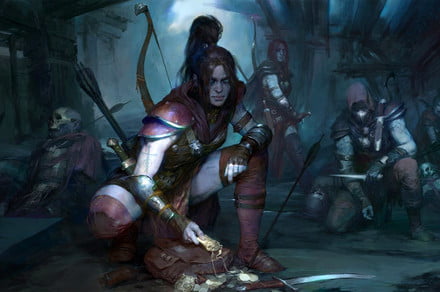 Blizzcon 2021 kicked off with a batch of exciting game announcements, headlined by a Diablo 2 remaster. The showcase also highlighted Diablo 4, Blizzard Arcade Collection, new World of Warcraft updates, and more.

The long-rumored Diablo 2 remaster was finally shown off following weeks of speculation. Diablo 2 Resurrected is a full HD remaster of the original game and its expansion, Lord of Destruction. The rerelease will allow players to play the game in its original 2D form. The game is coming this year to PC, PlayStation, Nintendo Switch, and Xbox with cross-progression.

Blizzard also gave some new details on Diablo 4. The classic rogue class is coming to the game, a fast character that fights with various bow and arrow abilities.

Blizzard Arcade Collection is a new retro game bundle that includes The Lost Vikings, Rock n’ Roll Racing, and Blackthorn. All three classic games are faithful ports with some added features and quality of life improvements, such as saving and loading. The collection will be available on PC via Battle.net, PlayStation 4, Xbox One, and Nintendo Switch.

Introducing the next chapter in Shadowlands, Chains of Domination. ⛓ pic.twitter.com/98rS6WisQS

World of Warcraft is getting its first new update since the launch of Shadowlands. The new DLC is called Chains of Destruction, and Blizzard will discuss more details during Blizzcon weekend. World of Warcraft Classic is getting an update as well, a new version of 2007’s Burning Crusade update, which launches in 2021.

Hearthstone is getting an update called Forged in the Barrens, which brings new cards to the game. In addition, the deckbuilding game is getting a new single-player mode called Mercenaries, which is a take on the roguelike genre.

Unfortunately, Overwatch 2 was a no-show at the presentation, but more details on it are coming later this weekend during Blizzcon.