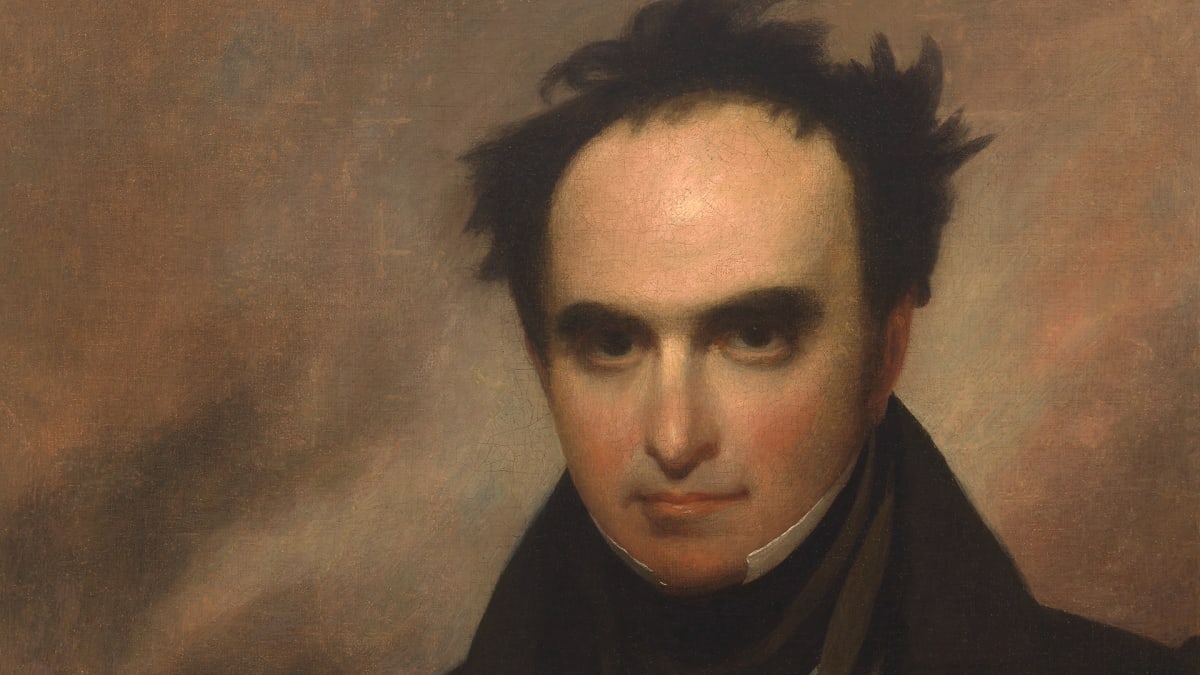 Daniel Webster (1782-1852) became one of America’s greatest orators and most influential statesmen in the early 19th century. As a lawyer, he argued several landmark cases before the Supreme Court that expanded the power of the federal government. A staunch nationalist, Webster has been elected to several terms in the House of Representatives and the Senate, where he represented Massachusetts, and has twice served as United States Secretary of State.

Early life and career in law and politics

Webster was born January 18, 1782 in Salisbury, New Hampshire, on what was then the frontier of English settlement in North America. His father was a farmer and tavern keeper, and young Webster often gave readings and recitations to entertain tavern guests, an early indication of his oratory skills.

After less than a year of preparatory school at Phillips Exeter Academy, Webster entered Dartmouth College at the age of 15. He graduated in 1801 near the top of his class and began studying law under the tutelage of a local lawyer in Salisbury. By 1807 Webster had enough experience to open his own law firm in Portsmouth, New Hampshire. He married Grace Fletcher in 1808 and the couple would have five children.

Motivated by the economic interests of his clients, the wealthy shipowners and merchants of Portsmouth, Webster was drawn into politics. He opposed the embargo and other policies of the administration of Thomas Jefferson aimed at limiting trade with Britain and France. After such policies resulted in the United States declaring war on Britain in 1812, Webster gave a public speech in July, denouncing Jeffersonian policies as unfairly punishing New England. Known as the “Rockingham Memorial,” the speech propelled Webster’s election to Congress as a member of the Federalist Party in 1813.

Arguments before the Supreme Court

During his early years in Congress, Webster denounced President James Madison’s war policies, using a state rights argument to oppose a failed conscription bill. After the War of 1812 and the effective dissolution of the Federalist Party, he left Washington and moved with his family to Boston, Massachusetts. Representing some of the city’s top business interests, he has become one of the highest paid lawyers in the country.

Despite his earlier defense of state rights, Webster’s convincing arguments before the Supreme Court would help shape a series of landmark decisions by Chief Justice John Marshall regarding the extent of federal power under the Constitution, including Dartmouth College. v. Woodward (1819) and Gibbons vs. Ogden (1824).

In the most famous, McCulloch v. Maryland (1824), Marshall accepted Webster’s view that Congress had the power, under the Constitution, to “make any laws that shall be necessary and appropriate” – including the charter of the Bank of the States. – United – and who declares like Maryland could not impose a branch of this bank, or any other government institution. He even stole Webster’s memorable language to defend the bank, writing that “the power to tax implies the power to destroy.”

In addition to his legal victories, Webster continued to gain attention for his public speech, including a moving speech in Plymouth in 1820 to commemorate the 200th anniversary of the Mayflower landing there.

The Senate debate on annulment

In 1823, Webster represented his Boston constituents in the House of Representatives, where he focused on challenging the protective tariffs championed by Henry Clay of Kentucky. After being elected to the Senate in 1826, Webster was returning to Washington in December 1827 when his wife, Grace, fell ill during the trip; she died less than a month later. Webster married his second wife, Caroline LeRoy, at the end of 1829.

In the Senate, Webster would make a name for himself as one of the so-called Grand Triumvirates of influential statesmen of the day, alongside Clay and John C. Calhoun of South Carolina. Although he had previously opposed protective tariffs as unconstitutional (and bad for New England’s shipping business), he changed his mind regarding the tariff of 1828. Known in the South as Called Tariff of Abominations, the law offered significant protection to the growth of his region. textile industry.

In 1830, Robert Hayne of South Carolina presented Calhoun’s argument that a state had the right to overturn laws it did not like, and even to separate from the Union as a last resort. (At the time, Calhoun was vice president and couldn’t argue in the Senate itself.) In a speech considered one of the greatest in U.S. political history, Webster eloquently defended the supremacy of the federal government over the states, arguing that the cancellation would end up tearing the country apart.

The Bank War and the Emergence of the Whig Party

Despite his opposition to President Andrew Jackson, Webster supported a force bill that would allow Jackson to send federal troops to South Carolina to enforce tariff collection during the cancellation crisis that followed. After South Carolina backed down on the cancellation, Webster broke again with Jackson over the Bank of the United States, which Jackson sought to destroy by vetoing the bank’s charter renewal.

Despite the best efforts of Webster, who acted as legal counsel to the Bank and its chairman, Nicholas Biddle, Congress was unable to override its veto. During the ensuing banking war, opponents of the Jacksonian Democrats formed the new Whig party. Three Whig candidates, including Webster, ran for president in 1836, all defeated by Jackson’s preferred successor, Martin Van Buren.

When Whig William Henry Harrison defeated Van Buren in 1840, he appointed Webster Secretary of State. But Harrison died just weeks into his tenure, becoming the first US president to die during his tenure. The rest of the cabinet resigned in protest rather than serving under the direction of its vice president, John Tyler, but Webster remained in office for the next two years, helping to resolve a dispute over the Maine border and improve American relations with Great Britain. In 1843 Webster resigned due to growing debt (he was spending lavishly) and continued the Whig’s opposition to Tyler.

War with Texas and the Compromise of 1850

Reelected to the Senate in 1845, Webster opposed the annexation of Texas and the ensuing war with Mexico under Tyler’s successor, James K. Polk, in which one of Webster’s own sons died of typhoid fever while on duty. Still hoping to win the presidency, Webster tried to follow a delicate line on the biggest issue dividing the nation at the time: the expansion of slavery into new American territory.

Amid the escalating sectoral tensions that followed the US-Mexican War, Webster spoke out in favor of Clay’s compromise proposals, arguing in his “March Seven” speech in 1850 that a ban on Slavery on the territory acquired from Mexico was unnecessary because the climate of the region was not conducive to plantation agriculture. Webster’s support for the Compromise of 1850, including the controversial law requiring federal officials to aid in the recapture of fleeing slaves, infuriated the anti-slavery Whigs as well as many northerners, and definitively condemned his presidential aspirations.

The last years and death

Webster was again Secretary of State under Millard Fillmore from 1850 to 1852, negotiating tensions between the United States and Austria and pushing for the opening of American trade with Japan. He made a final attempt to win the Whig presidential nomination in 1852 over other rivals (including Fillmore) but was rejected in favor of military hero Winfield Scott.

Already suffering from cirrhosis of the liver, Webster’s health deteriorated after a car crash in May 1852 left him with a head injury and internal injuries. He died on October 24, 1852 at his home in Marshfield, Massachusetts. The only one of Webster’s five children to survive him, his son Daniel Fletcher Webster, was killed in the Second Battle of Bull Run as he struggled to preserve the Union his father had defended.

10 Major Labor Strikes Throughout US History