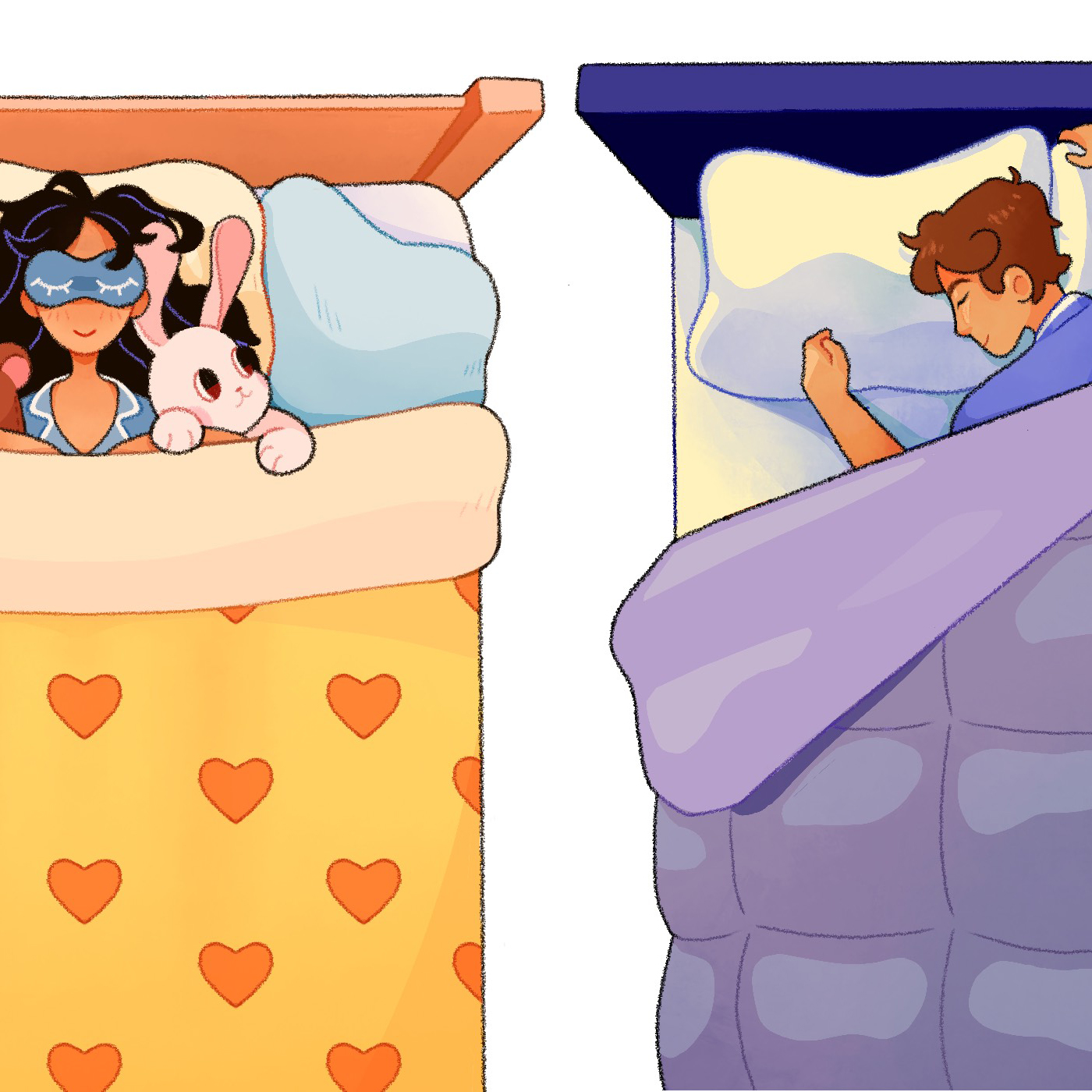 Mostly, we just like our space and the feel of stretching out, unencumbered, for seven to eight hours. And I realized during this past year of forced togetherness how the choice we made for nighttime solitude has been a mutual gift.

I didn’t start out this way. When I had my first serious boyfriend in graduate school (I was a late bloomer), spending the night together was a barometer of devotion. Not staying over meant something wasn’t quite right.

I was less likely to think that by the time I met my husband. But even if I knew that sleeping in separate beds didn’t mean we lacked intimacy, I still thought we must be missing out, especially when I would watch romantic movies featuring couples having cozy pillow talk or waking up lovingly wound around each other. The idea of a woman snuggling up to her significant other and then drifting off into blissful sleep lived large in my imagination.

So I tried to make it a reality. Though my husband and I clearly preferred our arrangement, I yearned for us to be a couple with traditional sleep arrangements at various times — most notably in the early 2010s, when we were having some marriage struggles. I would listen to friends talking about how much they valued the closeness of sleeping in the same bed and think, “Oh, that must be what we’re missing.”

Of course, it wasn’t. The bottom line on our marriage struggles was simply this: We both had to grow up. For me, growing up meant finally accepting that doing things in our marriage differently than the norm was what made us better. Like sleeping in separate beds.

Every few years, a study comes out with findings about the sleep problems associated with couples sharing a bed or how many couples don’t actually co-sleep, like 2013 research from the University of California, Berkeley, that found a poor night’s sleep together can make couples fight more during the day, or a 2017 Better Sleep Council survey finding that 63 percent of couples sleep most of the night separated.

Sleep scientist Wendy Troxel, whose name I saw associated with at least half of the studies I scanned, gave an entire TED talk about the topic of couples sleeping apart. She pointed out that not only is the study of couples’ sleeping habits relatively new (traditionally, most sleep studies had a person come into a sleep lab, alone), there’s barely any research on whether sleeping apart hurts a couple’s intimacy.

It’s an area, though, in which data can’t tell the whole story because it’s the couples themselves who decide if it’s unhealthy for the relationship. My husband and I have better intimacy now because we fundamentally get each other. We got here because of all the conversations and moments of vulnerability that happened during the day — not during sleepless, snore-filled nights.

I know we’re not alone, and during the close quarters that came to define 2020 for so many couples, I bet our situation was enviable. And yet, sleeping apart is nearly always represented as a sign of trouble in a relationship. In movies and shows, the trope of one person sleeping on the couch when partners are fighting is ubiquitous. I used to bristle and take these scenes personally. Now I just laugh. It’s such an unoriginal storyline, and so untrue.

It’s the couples themselves who decide if it’s unhealthy for the relationship. My husband and I have better intimacy now because we fundamentally get each other.

Of course, our kids also see these same representations, and I doubt the majority of their friends have parents with separate bedrooms. Having recently written a book about honesty, I don’t shy away from having frank conversations about taboo topics with kids. The thing I’ve emphasized in our conversations is that having separate bedrooms isn’t a sign of a problem; it’s a sign that we love and respect each other more than we care about the optics.

Married couples sleeping apart has lately been called a “sleep divorce.” The incipient discussion and reporting about the topic is a good thing, but the term stinks. It’s a misnomer, and inherently negative — and reinforces all the social pressure against taking a step that can be both healthy for a relationship and a person’s body.

Maybe I’ll think of some better, funnier term tonight, in my quiet, chilly, sneeze- and snore-free bedroom. And the next day, I’ll walk into the kitchen, kiss my husband good morning and, well-rested and glad to be reunited, we’ll laugh about it together.

Australia Covid live news: half of Australia in lockdown as protesters clash with police in Melbourne and exposure sites grow | Australia news

AFL-CIO President Richard Trumka, a leader for labor rights in Washington, dies at 72