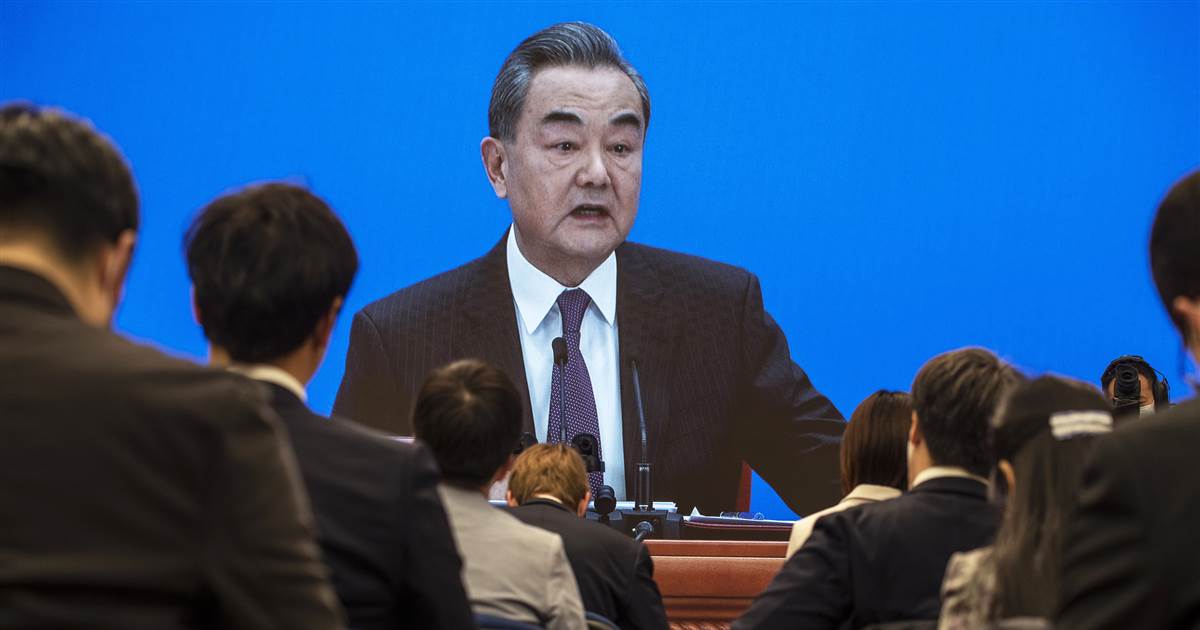 BEIJING — President Joe Biden’s administration should roll back the “dangerous practice” of showing support for Taiwan, China’s foreign minister said Sunday, while expressing hope that the countries could collaborate on “common challenges” like coronavirus and climate change.

Wang Yi told a news conference on the sidelines of China’s annual National People’s Congress, that Taiwan was “an inalienable part of Chinese territory” and an “insurmountable red line” for Beijing.

China views Taiwan as an illegitimate breakaway province. When the civil war in China between the communists and nationalists ended in 1949, with the former triumphant, the latter set up a rival government in Taipei.

The U.S. has no official relations with Taiwan but extensive informal ties. Former President Donald Trump angered China by sending Cabinet officials to visit Taiwan in a show of support.

Wang said China urged the new government to “fully understand the high sensitivity of the Taiwan issue” and “completely change the previous administration’s dangerous practices of ‘crossing the line’ and ‘playing with fire’.”

He added that the Chinese government had “no room for compromise” on the issue and he gave no indication on how Beijing might react if Biden does not change course. However, the ruling Communist Party has threatened to invade if Taiwan declares formal independence or delays talks on uniting with the mainland.

His comments came less than a week after Secretary of State Antony Blinken said China represented America’s “biggest geopolitical test of the 21st century” and was the only country with enough power to jeopardize the current international order.

“China is the only country with the economic, diplomatic, military and technological power to seriously challenge the stable and open international system — all the rules, values and relationships that make the world work the way we want it to,” said Blinken, in an address at the State Department on Wednesday.

Seeking to draw a contrast with the previous administration, which had a skeptical view of multilateral organizations and clashed with a number of allies, Blinken said tackling the challenge posed by China would require cooperating with international organizations and working with allies and partners, “not denigrating them.”

Wang, who has served in the role since 2013, said China was “willing to discuss and deepen cooperation with the United States with an open mind,” citing common challenges like the coronavirus pandemic, climate change, and spurring the global economic recovery.

NBC News has approached the Department of State for comment.

He also defended proposed changes in Hong Kong that will tighten Beijing’s control by reducing the role of its public in government, and dismissed complaints that they will erode the autonomy promised to the former British colony when it returned to China in 1997.

Rights groups say more than 1 million people, many of them members of the Uighur minority, have been sent to detention camps. Chinese officials say they are trying to prevent extremism.

Wang said the genocide accusations were complete lie fabricated with ulterior motives. He also blamed “anti-China forces” which, he said, wanted to “undermine the security and stability of Xinjiang and hinder China’s development and growth.”

Wang’s comments were an attempt “to get out of the pattern of the past and relax some of the restrictions so that both countries can find new direction,” Dr. Henry Wang Huiyao, president of the Center for China and Globalization think tank, told NBC News.

However, he admitted the focus was “on issues where we don’t have much disagreement.”

Reuters contributed to this report.

Eric Baculinao is a producer based in Beijing. A long-term resident of Beijing who is fluent in Chinese, Baculiano scans Chinese news daily for hints of major new policy trends and insights into the workings of China’s secretive Communist Party and government leadership.