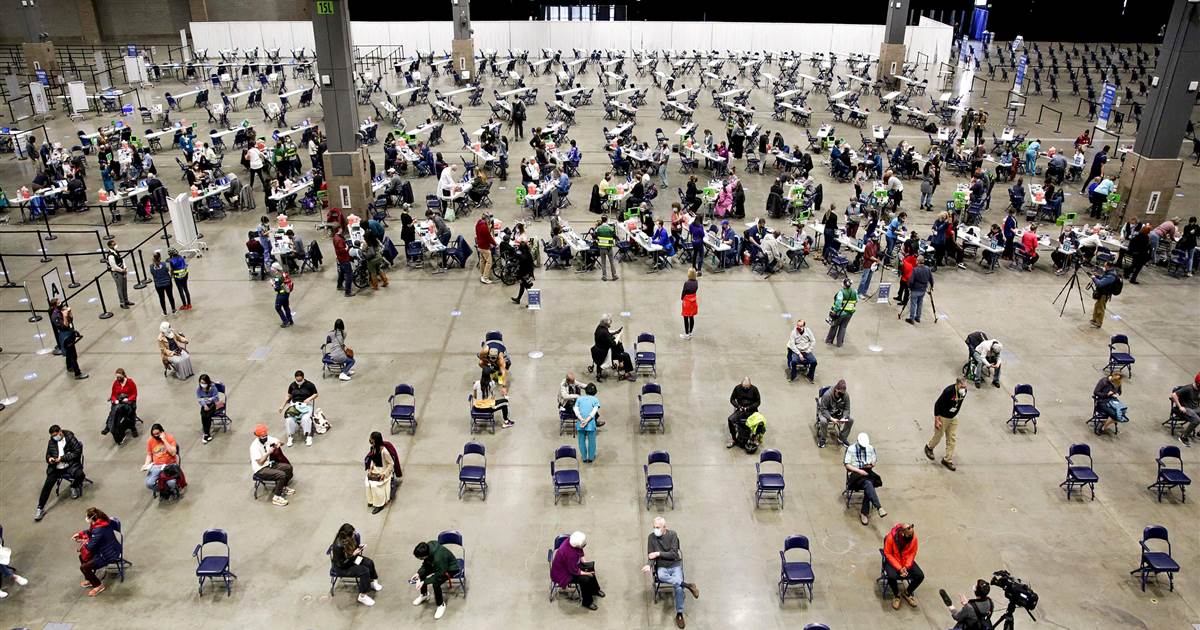 WASHINGTON — President Joe Biden said Tuesday that all adults in the U.S. should be eligible to receive the Covid-19 vaccine by April 19 as he pleaded with Americans to not let their guard down in the coming weeks as the number of new infections continues to rise.

The new deadline to expand eligibility — which is two weeks earlier than Biden had previously targeted — should not be difficult to meet since several states have already begun administering the vaccine to anyone over 16 who wants it.

Biden said the U.S. has administered 150 million doses of the vaccine with 75 percent of seniors having received at least one shot. But he said it will take several more months for most adults to be fully vaccinated with lives at risk in the meantime if people stop following social distancing and mask wearing recommendations.

As of Monday, new infections over the past week were up 7 percent with an increasing number of young people being hospitalized amid the spread of new strains of the virus, according to the Centers for Disease Control and Prevention.

“The virus is spreading because we have too many people who see the end in sight think we are at the finish line already,” Biden said. “Let me be deadly earnest with you, we aren’t finished. We still have a lot of work to do. We’re still in a life and death race against this virus. Until we get more people vaccinated we need everyone to wash their hands, socially distance and mask up.”

But just because every adult will be eligible for the shot by April 19 doesn’t mean everyone will be able to receive it by then, White House press secretary Jen Psaki told reporters. Biden has said the U.S. won’t have enough doses for every adult until the end of May.

“That doesn’t mean they will get it that day; it means they can join the line that day, if they have not already done that beforehand,” Psaki said.

Psaki said the U.S. will distribute 28 million doses of the vaccine this week, a 15 percent decline from last week. A White House officials said they are seeing “uneven” ramp up from Johnson & Johnson, which has been anticipated, but that they still plan for the company to meet its goal of delivering 24 million doses in April.

Most states have already announced they would be making all adults eligible for vaccines by April 19, with only Hawaii remaining to do so, according to NBC News’s count. Oregon Gov. Kate Brown tweeted after Biden’s planned announcement was reported that her state would also make residents over the age of 16 eligible for vaccinations starting on that date.

Asked why Biden was announcing the new timeframe when nearly every state has already moved up eligibility to the April date, Psaki said the president wanted to provide clarity and remind seniors to hurry to get their shots before the lines get long.

“He is certainly confirming for the public that everyone is eligible around the country,” Psaki said. “That is a great deal of clarity. They don’t have to go to their local state website and see when they’re eligible, they know that they are eligible on April 19.”

While many Americans 16 and older will still have to wait in line to get an appointment once they become eligible on April 19, Biden indicated that could also soon change.

During a visit to a pop-up vaccination site in Virginia ahead of his speech Tuesday afternoon, Biden said, “Pretty soon I am going to announce that everybody over the age of 18 is just automatically able to show up” to get a vaccine.

Biden said he would be making that announcement in a couple of weeks.

Biden said in his first primetime address as president last month that he was directing states to make all adults eligible for coronavirus vaccinations no later than May 1.

The president’s announcement Tuesday comes as officials have expressed concern about another surge in Covid-19 cases, with the incidence rate rising in young adults. New Covid-19 cases over the past week are up 7 percent over the prior period, hospital admissions are up 3 percent and deaths are down slightly to around 800 a day, officials said at a White House coronavirus briefing Monday.

Among those 65 and older, 55 percent of whom are fully vaccinated, there has been a decrease in emergency room visits and hospitalizations, officials said.

According to the CDC, nearly a quarter of adults in the U.S. are fully vaccinated and about 40 percent have received at least one dose of a Covid-19 vaccine.

Shannon Pettypiece is the senior White House reporter for NBCNews.com.