Belfast: how Kenneth Branagh was inspired by his youth for this beautiful film nominated for… 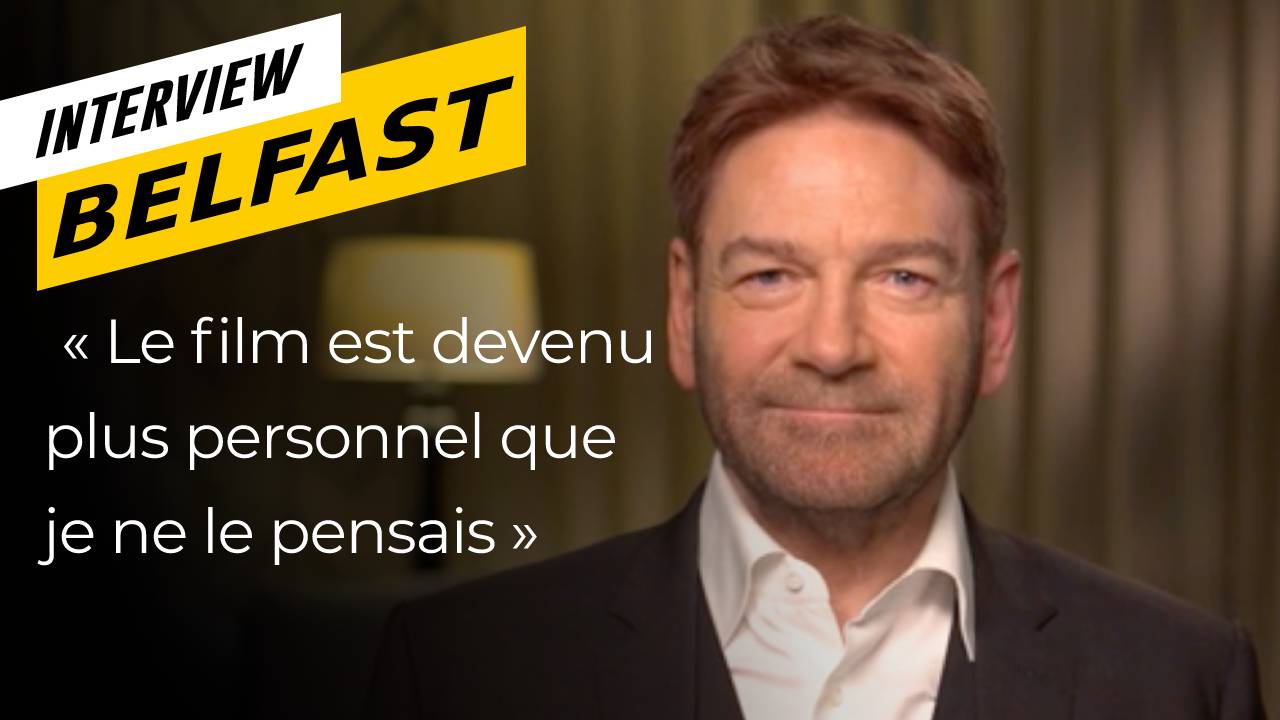 Accompanied by his actors Jamie Dornan, Caitriona Balfe and Ciaran Hinds, Kenneth Branagh evokes “Belfast”, a film inspired by his childhood in Ireland.

Thor in Phase I of the Marvel Cinematic Universe. The rebirth of Jack Ryan on the big screen. The transposition of Disney’s Cinderella live. Two luxurious adaptations of Agatha Christie, and a dive into the world of novels for young adults. With the exception of this film on his idol William Shakespeare (All is True) released directly on VOD with us, Kenneth Branagh has navigated between studios in recent years.

His return to a more intimate cinema with Belfast is all the more striking as the feature film is inspired by his own childhood in Ireland during the summer of 1969, when man walked on the Moon and violence broke out in the streets of his city. Alongside his actors and compatriots Jamie Dornan, Caitriona Balfe and Ciaran Hinds, who respectively play versions of his father, mother and grandfather, the filmmaker looks back on this beautiful black and white film in the running for seven Oscars.

AlloCiné: “Belfast” is a very personal project for you. How long have you had this story in mind?
Kenneth Branagh : I feel like I’ve wanted to write about Belfast for a long time, not really knowing what the story would be. It was not until the time of confinement, when I felt a sense of uncertainty about this unknown future, that I really remembered what had happened when violence was invited into my living in Belfast.

Because this same feeling of a totally uncertain future, I had already felt it when I was 9 years old. The way these families – and not just ours – coped with this situation suddenly became, fifty years later, a way of telling the story. And so it became more personal than I thought.

Was it also, for you, a way of reconnecting with a more intimate cinema, after several big films made for studios?
Kenneth Branagh: I think so. And it’s even what I would call my natural place. I started with small films, which were based on the performances of the actors. And doing Belfast right after lockdown turned out to be very collaborative, like a small cottage industry getting back to work. Despite the Covid protocols, the experience was very personal and, from this point of view, the project was very renewing, very restorative. As a return to a way of working that I really like.

Doing Belfast right after lockdown turned out to be very collaborative, like a small cottage industry getting back to work

You were talking earlier about your family: how does it work when you have to choose actors and actresses to play its members?
Kenneth Branagh: I wanted the film to be inspired by my story, but I told the actors very early on that although I was very happy to answer them on specific questions around my parents and my family, I preferred to hear Jamie Dornan talk about his relationship with his father.

Or that Caitriona Balfe speaks of her experience, she who grew up on the border between the North and the South of Ireland, where the atmosphere was particularly explosive. It was a potentially very violent place, so I wanted her to own the subject. But the challenge, with Caitriona and Jamie, was mostly finding that sparkle, that chemistry that I felt my parents had. It might have been the perspective of a 9 year old, but I saw a glamor in them that Jamie and Caitriona managed to capture.

Judi Dench and Ciaran Hinds had, on their side, the spirit and the humor of my grandparents. In addition to a soul that gives them depth. And as for the young Jude Hill, the goal was to find someone present enough that we could see the film and the story on his features. He is also a child who knows how to listen without giving the impression that he is playing someone who listens. He was just present, and I was lucky with the actors I was able to get.

Jamie Dornan : When Kenneth came to see me, only Judi Dench was attached to the project, so it was like a home run for me: I was in without even having to read the script. Then I read it and realized how close it was to his experience and his personal story, which can add a little extra pressure. But I knew Ken wanted me for the role and I was afraid that the day we were to meet to talk to each other, he would realize he had made a big mistake and didn’t want me to do the movie anymore. (laughs)

But the opposite happened. He imbued me with the confidence he had in me and his desire for me to take this trip with him. I felt particularly privileged to be asked to be involved in this story which is very personal for him, but also for me. I’m also from Belfast, I’ve told stories from the city and plan to do so for the rest of my career if given the chance. This one seemed very special to me because it was very human and down-to-earth, and it was about a family caught up in these events. And this privilege made me feel less pressure than freedom vis-à-vis this story.

Ciaran Hinds : We are all from Northern Ireland. Apart from Dame Judi Dench. But Kenneth and her have worked together eleven or twelve times, between theater and cinema, so he trusts her completely. They have this wonderful relationship, and history has proven to us what a brilliant actress she is. I think he always thought of her for the role, because the love and affection he feels for her must have reminded him of the love and affection he felt for his grandmother. So it made sense for her to play this character.

Caitriona Balfe : When I was approached and told that Kenneth wanted to meet me, Dame Judi, Jamie and Ciaran Hinds were already engaged. So I was overexcited by the simple fact that I was offered to read the script, which I found magnificent. Just like the character of Ma who, on paper, seemed to me complex, fully formed, so much so that I had the feeling of recognizing her immediately.

And I discovered, when I first met him, that Kenneth was one of the most adorable people. He very quickly asked me about my life and my experiences, and I then understood that he was trying to see what I could bring to the role, insofar as the idea was not to make a documentary on his parents. He gave us a lot of freedom, and I feel like she carried us along and helped make this project something organic and charming, where we were all in tune with each other. That’s also what made it special.

You said in an interview that the memories of Belfast you had were gray because the sky was always gray Kenneth. Is that why you shot the film in black and white?
Kenneth Branagh: It was a monochrome world, yes. It often rained in this very masculine city, the gray sky, typical of Northern Ireland, was very present. And the TV was black and white. Like the movies I discovered at home. Telling the story of Belfast in this way gave it a kind of poetry and brought it closer to the social realism that I loved in early 60s British films.

And it served as a contrast to the appearance of explosive colors when we went to the movies with the family and witnessed the immersive beauty of Technicolor on the big screen during the 1960s.

These scenes give “Belfast” an even more cinematic feel. Are there any movies that have inspired you, story-wise or visually? We sometimes think of “Cinema Paradiso”.
Kenneth Branagh: Cinema Paradiso definitely counted, for his heart. But also The Bicycle Thief. Or Goodbye children by Louis Malle for his tone. It is a magnificent film, without doubt one of my favorites, which has a tenderness, a poignancy, a bittersweet nature and a youthfulness that make it an exquisite work.

Jamie Dornan: The film is also inspired by photographs such as those of Henri Cartier-Bresson, which had an influence on the landscape. We were also shown a montage, which showed us early on what Belfast was going to look like stylistically. But we knew that Kenneth, production designer Jim Clay and cinematographer Haris Zambarloukos, with this black and white film idea, were going to create a nice visual landscape in which we would just have to fill in the blanks (laughs)

One of the great strengths of the film is its aesthetics. We remember a lot of his plans, and we come away thinking that Belfast has never looked so beautiful and artistic before. And it’s nice to see the city in this way rather than always being pessimistic. It’s very poetic and pleasant to be part of these images.

Interview by Maximilien Pierrette in Paris on January 21 and February 15, 2022