I have no idea why people assume others are monolingual these days. People have families from different places, they’ve chosen to learn a second language on their own, etc etc, but there are plenty of reasons people can understand and speak something other than their native tongue.

Is it on all of us to disclose when we understand what’s being said around us if we know others assume we don’t?

That’s the argument this woman found herself in with her girlfriend after it was revealed a few months into their relationship that she could understand her girlfriend’s family speaking Japanese the entire time.

OP’s family on her mother’s side are Japanese and so she grew up in Brazil speaking both Portuguese and Japanese fluently.

I (18F) am Japanese descent, it is not in my surname because it is on my mother’s side and I only have my father’s surname. But I grew up at my maternal great-grandmother and grandmother’s house, who spoke almost 70% of the time in Japanese, so I can speak Japanese, as does my whole family (including my parents).

I live in another state far from where my parents live (who is from Brazil will understand, my relatives are from Rio Grande do Sul and I live in Brasilia).

Her girlfriend is of similar descent, but because OP’s family does not live nearby, they’ve never really discussed whether or not OP speaks the language.

I’ve been dating Lara (19F) for 5 months, she is also a descendant, but unlike me, she has Asian traits. She knows I am of Japanese descent, but we never got into the conversation whether I speak or not, she never asked and I never commented.

The couple has regular meals at the girlfriend’s house, and a small percentage of those meals are spent with the girlfriend’s family speaking Japanese to each other – clearly assuming OP doesn’t understand.

They will sometimes make remarks about OP as well, and occasionally the girlfriend will tell them to lay off.

It’s been about 2 months since I’ve had lunch every two weeks at her parents’ house where she lives (both of whom are of Japanese descent) and a funny thing always happened.

They would talk in Japanese some things like “Go make the bed”, “the dishes for lunch are yours” to the parts that spoke bad of me “She didn’t eat everything on her plate” or “strange way to dress”. My girlfriend used to scold her parents also in Japanese and this has been the case for the last 2 months.

I’m not necessarily offended, but I find it extremely funny that they think I don’t know and talk about everything in Japanese thinking I’m lost in the conversation. (It is worth mentioning that they keep the conversation 97% of the time in Portuguese).

Recently the girlfriend and her family came to meet OP’s family, where they learned in an unplanned moment that OP has been able to understand them this entire time.

My parents came over this weekend and Lara’s parents insisted that we go to their house so they could get to know each other.

I know Lara and her parents were surprised, but they didn’t comment and dinner stayed that way for the rest of the night.

Later, the girlfriend confronted her, saying that she should have said something and her family was embarrassed at not having included her in all of their conversations.

After I dropped my parents off at the hotel, Lara asked to talk to me via video call and said that I embarrassed my parents because they didn’t know that I understood and spoke in Japanese, and they talked about family things in another language. , precisely because I would not understand and would not make it boring.

They got into a bit of a thing about whether or not the girlfriend really did her best to stand up for OP in those moments, and OP is wondering whether she should have said something after all.

I replied saying that: “Just like they bad mouthed me, didn’t they? But I didn’t want to talk about it and you never asked, despite knowing that a part of my family is of Japanese descent.”

She still stood her ground saying that I could have said and avoided all the awkwardness at her parents’ dinner. I didn’t really do it on purpose, I just responded unintentionally to my mother talking in a language I’m fluent in.

Extra: I don’t live with Lara, so it didn’t happen that I spoke in Japanese with my relatives in front of her. Yes, it was the first time she had met my parents.

What does Reddit say? You know they’re not going to be shy about their thoughts!

The top comment is that it’s never ok to badmouth someone within earshot, and actions have consequences. 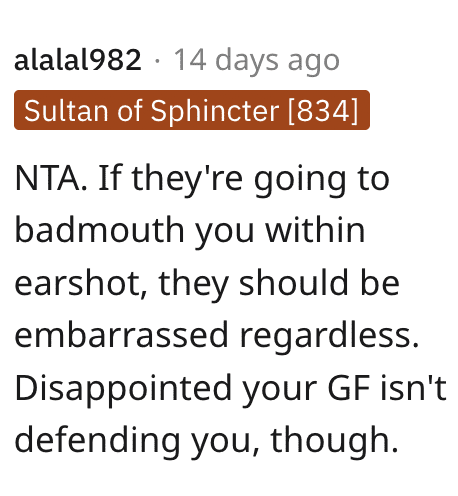 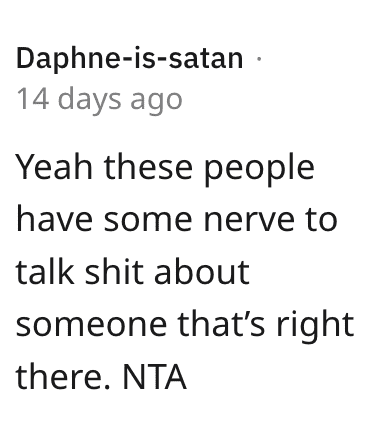 Maybe she was just waiting to use her power for good. 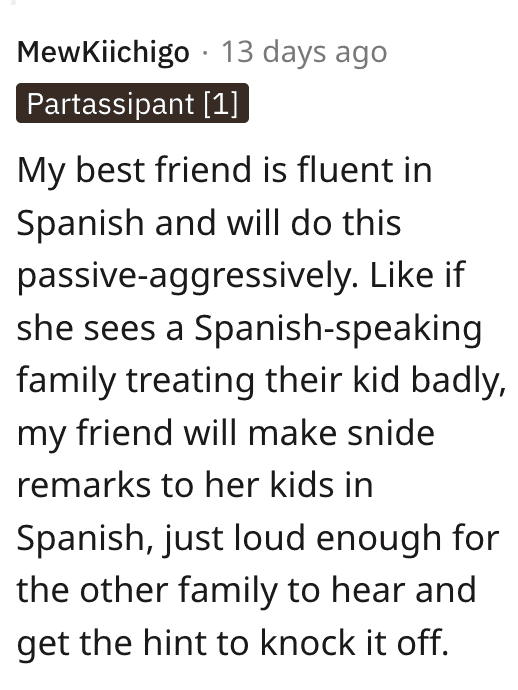 And I mean, they SHOULD be embarrassed. 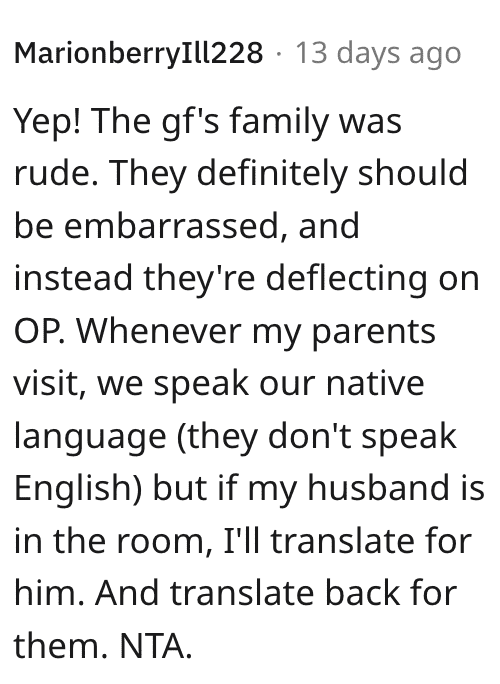 You know what they say about assuming… 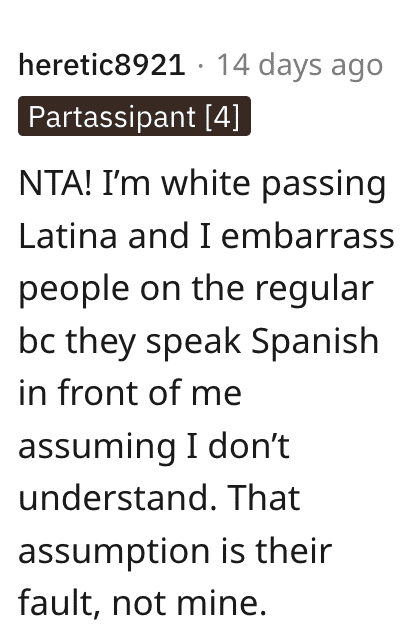 This girl is so not wrong and I’m disappointed in her girlfriend, tbh.

If you’re bilingual, tell us in the comments about your best/worst similar experience!