Are We All Required To Do Favors For Pregnant Women Everywhere?

If you’ve ever been pregnant, then you know that for all of the magical moments there are at least an equal amount of things that are not so great. From morning sickness to aches and pains and cravings that won’t stop, it’s a wild 9-month ride.

And you can’t get off.

That said, we are the ones who choose to get (and stay) pregnant, so there is a certain amount of “sucking it up” involved. Sure, it’s nice when our loved ones and even strangers care about our comfort, but is it required for people to go the extra mile?

That’s what OP, who is a college student who found herself living with a 6-months-pregnant roommate, is wondering.

Throwaway because I have too much personal stuff on my main.

I live in the dorms and got a new roommate this semester because my old one went home.

I had never met her before she moved in.

She’s currently 6 months pregnant and wants me to do more for her than I want to. We aren’t friends but because we share a room she says I should support her more.

First, OP had to get a lock after the roommate was stealing her food “because she was hungry.”

After she moved in I noticed the food from my little fridge (that I brought from home) kept going missing. I confronted her and she admitted she ate it but said it wasn’t her fault because she was hungry.

I got a lock for the fridge and she’s been really cold ever since.

Then, she got mad because OP’s boyfriend gave her a massage but OP refused to pay it forward with the roommate.

Then she got mad because I had a bad day one day last week so my boyfriend came over (during the hours we can have visitors in the dorms) to watch tv and he gave me a back rub (over my clothes) and she kept talking loudly about how she needs a massage.

After he left she tried to tell me I needed to give her a massage and rub her feet because she’s hurting but I refused because we aren’t close enough for me to want to touch her.

Then she tried to tell me I can’t have him over but I don’t see why she gets to set the rules.

Lastly, the roommate has asked her on more than one occasion to stop what she’s doing (even sleeping) to run and get food to accommodate her cravings.

Then over the weekend she wanted me to get food for her when I was studying and was mad when I told her to doordash or something.

Last night she woke me up because she was having food cravings and wanted me to drive to the store. The only one open at that hour is about 30 minutes away.

Is OP wrong to not feel comfortable with any of this? Are we all required to go out of our way to meet the needs of pregnant women?

I refused and she’s been complaining all day about how I’m a bitch for not supporting her.

Am I the a$$hole for not doing stuff for her?

Reddit’s got some thoughts on the matter!

The top comment confirms that being pregnant is not an excuse for any of this behavior. 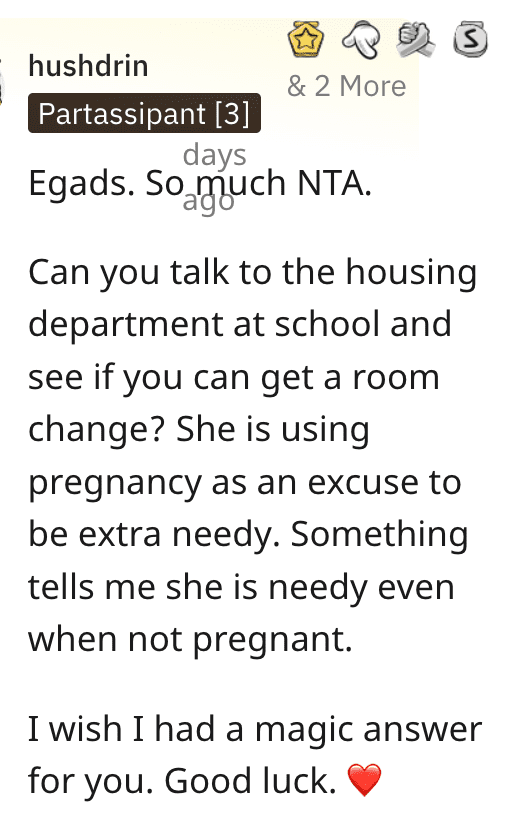 And technically, no one is required to do anything for anybody, regardless of gestating factors. 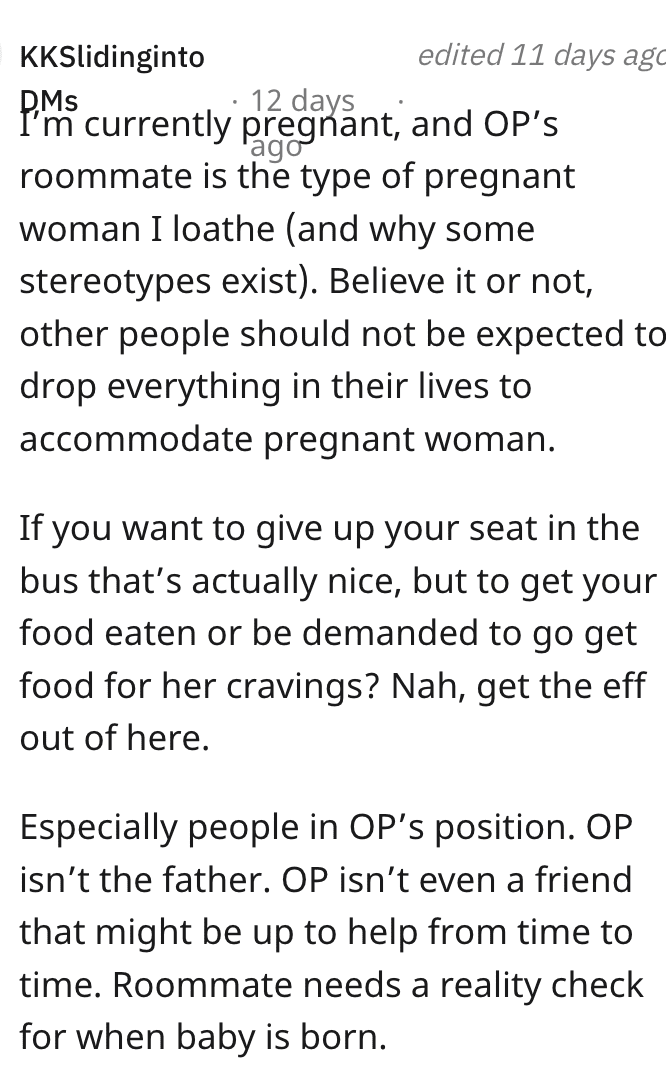 OP is a virtual stranger and they should not be expected to do anything at all for the roommate they barely know. 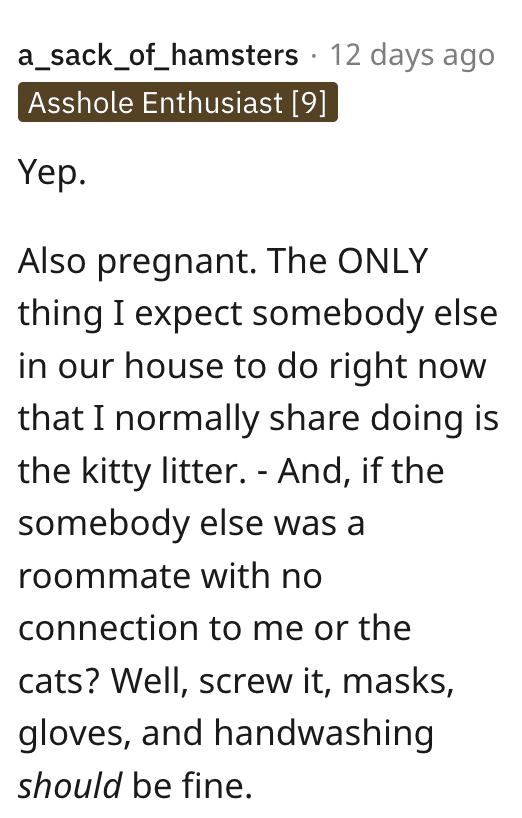 Pretty much everyone agrees this is a super weird flex. 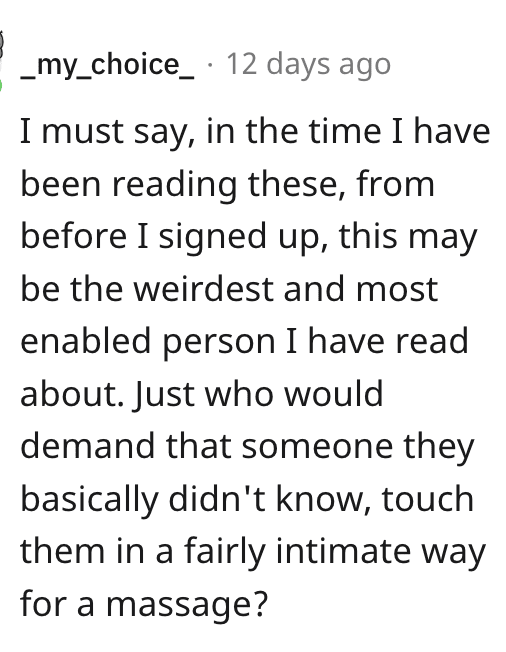 They want OP to check and see if there’s any official recourse. 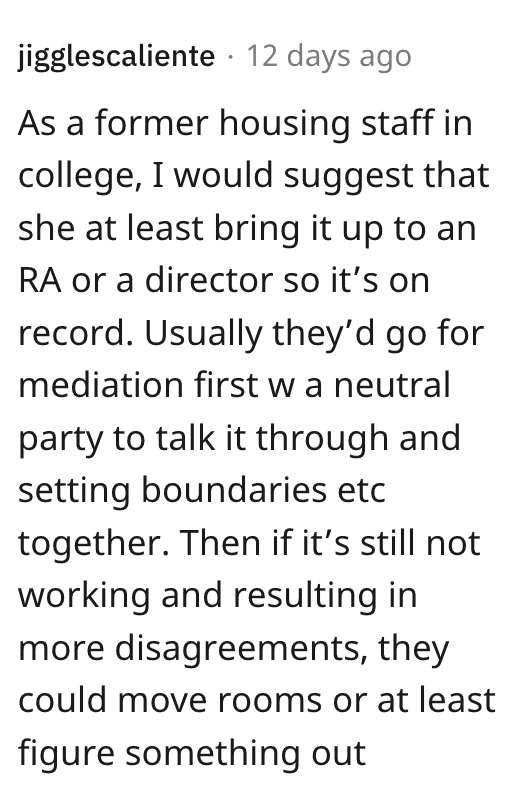 This is just appalling behavior and I have to wonder what the roommate’s upbringing was like for her to demand this sort of attention and care.

How would you respond if you were OP? Tell us in juicy detail down in the comments!