Amazon Astro Maps Your House in Minutes. Here’s How

Amazon Astro Maps Your House in Minutes: Amazon’s home robot Astro does a lotfrom dancing and making animal noises to playing videos and TV shows on its screen. Part of what differentiates the bot from Amazon’s Echo line of smart speakers and displays is that it can also run errands around the house — zooming from room to room to deliver drinks, snacks and messages.

But Astro isn’t the first device to learn to navigate your home. Robot vacuums have been doing it for years. How different are their approaches?

To find out, I spent a week testing Amazon Astro at the CNET Smart Home, and I interviewed Anthony Robson, Amazon’s product lead for Astro, all to find out how exactly this little wheel-bound robot rolls. 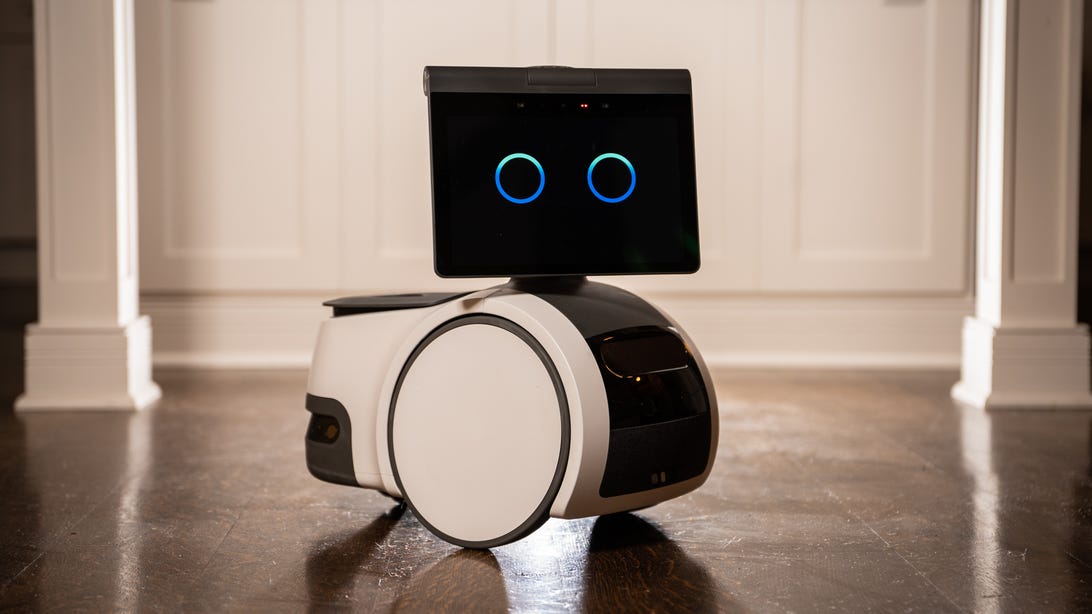 Astro is a lot more than an Amazon Echo Show on wheels. Chris Monroe/CNET

Robot vacuums have come a long way over the years, but their navigation was originally inspired by the systematic movement of insects like ants. Ants, when searching for food, aren’t mapping their surroundings; instead, they move according to a limited set of rules that help them thoroughly cover their environment while they search.

Such rules include moving in a spiral, following walls and moving in straight lines until interrupted. These seem simple enough, but the right mix of rules helps ants find food — and they can help robot vacuums clean an apartment floor, too.

Older and cheaper robot vacuums simulate insectoid movement using a variety of sensors: downward-angled cliff sensors to avoid drop-offs, outward-facing bump sensors to angle parallel to the wall and wheel-tracking optical encoders that track how far the vacuum has traveled, as well as the turns it has taken along the way.

But robot vacuums have evolved beyond such simple navigation in recent years, beginning to adopt V-SLAM systems (that is, visual simultaneous location and mapping) and/or lidar (light detection and ranging) to navigate rooms more efficiently and consistently. In short, these systems help robot vacuums actually map the room they’re in, then clean every inch of it.

Astro, it turns out, uses a similar form of V-SLAM, too. Much like higher end robot vacuums, Astro generates a map of your house in its app, where you can adjust room boundaries and determine out-of-bounds areas.

But Astro faces a problem newer robot vacuums typically don’t: Rather than navigating an unpeopled and tidy area once every couple of days, Astro moves around the house most often when people are there, standing, walking, leaving messes and rearranging furniture.

So how does the robot handle the chaos of navigating real life as it happens?

“We wanted Astro to move around your home gracefully at a comfortable walking speed,” Robson told me, “so the typical SLAM systems and obstacle avoidance systems for robotic vacuum cleaners weren’t going to be sufficient. They move… quite slow [and often] they’re trying to bump into things.”

For that reason, Robson says, Amazon’s team had to go back to the drawing board to redefine Astro’s goals. The robot moves from room to room without any need to cover more floor space, for example. If one route to a room is blocked by a closed door, the robot must check alternative routes before simply giving up.

In addition, Astro is a lot more interactive. It’s searching for people, following them, responding to their requests and even playing with them. That makes what Robson calls its “pet-like form factor” more appropriate — but that also means it won’t be sliding under couches or coffee tables.

More interactions also mean Astro sees a lot of short-term environmental changes, from people and pets to toys on the ground or moved furniture. It has to have the spatial awareness to back out of the way when you’re trying to reach a cabinet right behind it.

“[Astro] processes its raw sensor data in real time,” explained Robson. “[Then it] generates a couple different layers of maps, one of which is the SLAM map, one of which is an occupancy map.”

And Astro doesn’t just pay attention whether or not moving objects are present; it also differentiates between people of different ages, with different modes of movement.

“Astro has a computer vision system that it uses for visual ID,” Robson said. “Those algorithms have been trained also to work with wheelchairs, as well as people who are walking around, children who are running. We’ve captured as broad and diverse a population as possible.” 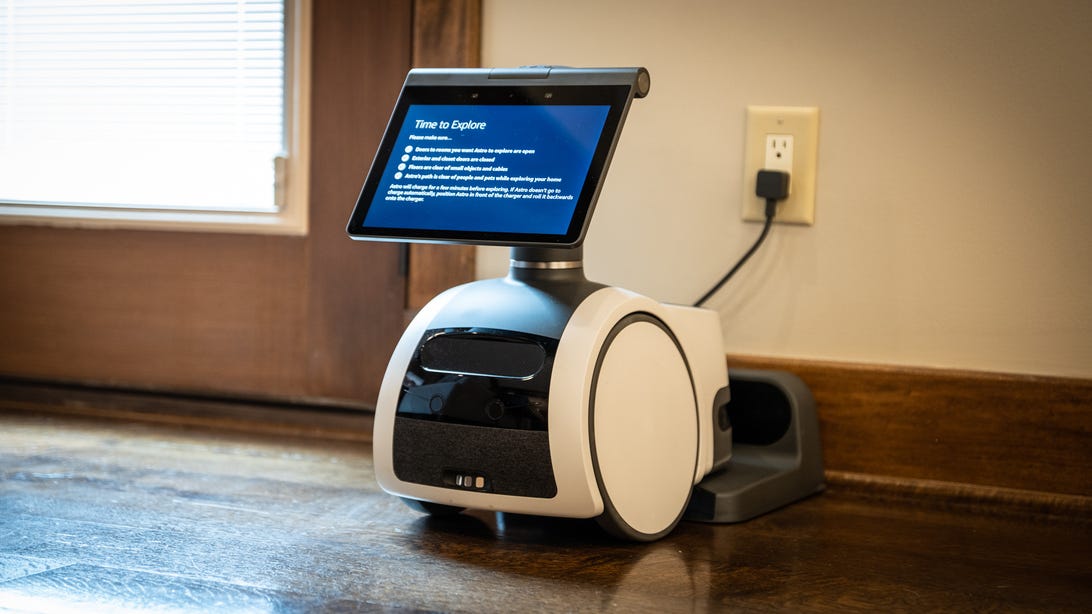 Astro learns to navigate your house after half an hour or so of exploring on its own.Chris Monroe/CNET

In addition, the team of developers behind Astro are considering various ways to make it more useful for people with visual impairments. For instance, an Astro that made certain clicking noises while moving would be easier to locate and avoid bumping into than an Astro that runs silently. Another potential setting would have Astro alert people to its presence if you enter a room where it is idling.

Other cool features: Astro continues to localize over the course of months, and all of its processing happens on-device.

“Only the simplest 2-D representation of the environment gets sent to the cloud for the purposes of processing it into a customer-facing map in the Astro app,” said Robson.

All of these features are innovative, and honestly, pretty cool. At least, they are in theory. But have they translated in my testing over the past week?

My testing has been hit-or-miss so far, but Astro shows true promise. Amazon’s robot had a bit of trouble mapping the CNET Smart Home because of the bright windows and the exposed staircase — a surprising issue, considering we’ve run robot vacuums here without issue for years. That said, once we’d covered all of those features with cardboard during the brief setup phase, Astro seemed to work just fine.

Its movement around the house ranges from impressive — like when it carefully squeezes between chairs and couches, despite only having an inch or two of clearance — and, well, less impressive. One issue is rear mobility. At times, Astro says it can’t move backward because something is behind it, despite there being nothing there.

In my week of testing, Astro has seemed to struggle most with identifying and responding appropriately to thinner home features like railings and the legs of some kinds of chairs and tables. But it seems like the robot is actually getting noticeably better at navigating the house — which it’s supposed to do over time. I’ve been genuinely impressed to see it encounter a closed door on the way to a room and immediately reroute to reach the room by different means.

I haven’t finished enough testing to give my final assessment of Astro’s navigation, but so far, Astro comes across as equal parts promising and unpolished. It’s undeniably cool… when it’s working as advertised. But it also makes total sense that Amazon is only selling Astro by invite only at the moment.

I asked Robson about Astro’s navigation in general, and how the team is feeling about it.

“We’re very proud of Astro’s navigation,” he told me. “But obviously we want to keep getting better… Every home is different… so we’re continuing to learn and over time we hope to continuously improve Astro’s capabilities.”

Turn Your Android Into a Wireless Mouse and More. Here’s How

Turn Your Android Phone Into a Google Home and More. Here’s How

Best Smart Home Deals: Save $50 on Nest Thermostat, $22 on Echo Dot and More

Traveling This Summer? 19 Tips to Know Before You Go