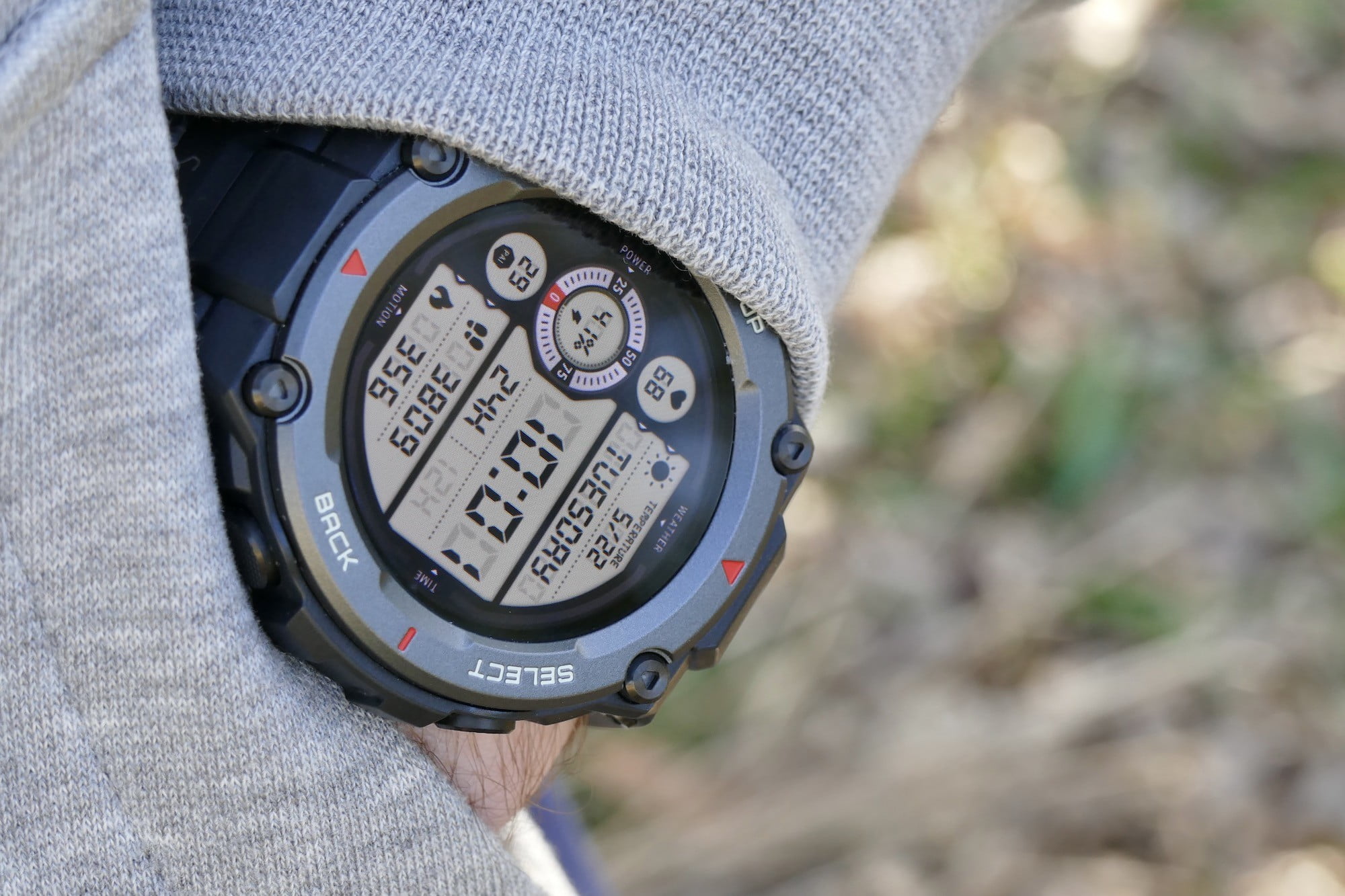 “Shorter battery life than promised and the same design as the old version dampen enthusiasm for the Amazfit T-Rex Pro, but a reasonable price, reliable software, and strong activity tracking stop it going extinct.”

Amazfit has been making a name for itself with a range of competitively priced, attractive, and easy-to-use smartwatches such as the GTR 2, and now it’s back with the Amazfit T-Rex Pro. It’s a follow-up of sorts to the T-Rex from early 2020, but it’s not the major evolutionary leap we’d like to see after a year of waiting.

Repeating the same designs over and over (the Amazfit GT series all look basically the same too) isn’t what we expect these days, and while it may help keep the price down, it doesn’t really inspire much interest or excitement. Let’s take a closer look at the T-Rex Pro to find out if we should ignore the lack of imagination, or if Amazfit needs some inspiration.

Did you see the Amazfit T-Rex? Good, because the T-Rex Pro looks almost identical. One slight change has made a difference to the impression the watch leaves, and that’s the different bezel treatment. The T-Rex’s bezel on my review sample was black plastic and looked cheap and nasty. The T-Rex Pro’s bezel is a contrasting gray color and has had a “metal-spraying” effect added, and it does have a slightly classier style than the old version.

Otherwise, the shape, size, and design are the same. The metal buttons have the same texture, the watches weigh basically the same at 59 grams, the Pro’s 22mm silicone rubber strap has more texture but the same design, and the 1.3-inch AMOLED screen is the same size and has the same 360 x 360-pixel resolution. They are the same.

The T-Rex Pro is designed for toughness, with resistance to high and low temperatures, humidity, salt, and shock. It has passed 15 different tests, compared to the T-Rex’s 12 tests, and has a 10ATM water resistance rating, up from 5ATM on the old T-Rex. What all this means is the Amazfit T-Rex Pro is a bit like a Casio G-Shock watch, complete with button guards and the oversize 13.5mm thick polycarbonate case, plus some G-Shock-esque watch faces. It’s also much like the Honor Watch GS Pro, but it doesn’t look or feel as expensive.

Do I hate it? No. The strap is comfortable and has plenty of adjustment for all wrist sizes (although the 48mm case isn’t really for small wrists at all). As someone who really likes G-Shock watches, I don’t completely object to the styling choices, but many will see it as big, ugly, and ungainly. It certainly lacks the goes-with-everything class of the GTR 2.

What I really object to is the T-Rex Pro is the T-Rex just with a different color bezel, and even the most optimistic will struggle to call it “ brand-new.” I appreciate repeating the same design keeps development costs down, and therefore the final price low, but to repeat this ad nauseam doesn’t generate any excitement, and that’s a serious problem in the competitive world of wearables.

Now I’ve had a moan about the design, surely we come to what makes the T-Rex Pro an upgrade over the T-Rex, and perhaps see what makes it Pro. While the hardware does contain the most significant upgrades over the old smartwatch, they’re hardly massive alterations. The heart rate sensor has been upgraded to Amazfit’s BioTracker 2 PPG optical sensor, and the watch now has a 3-axis gyroscope to go along with the 3-axis accelerometer, and a barometer too.

The upgraded BioTracker 2 sensor also takes Sp02 blood oxygen readings, and Amazfit boasts of the watch supporting 100 different workout modes, but this appears to be a software update feature also found on the GTR 2e rather than specific to the T-Rex Pro. The sensor upgrades have allowed Amazfit to incorporate some excellent new fitness tracking software features, which are surprisingly in-depth on the watch, and in the accompanying Zepp app.

Tracking a 30-minute exercise session returns the expected time elapsed, calorie burn, and average heart rate, but you also get more specific data like cadence, average stride, speed, elevation changes, and heart rate zones too. Once you’re done it provides a recommended recovery time along with VO2 Max data, and data sourced using FirstBeat’s algorithms. It’s comprehensive and mostly easy to understand, and I like that it can all be seen on the watch without visiting the app on your phone.

The FirstBeat training effect data does highlight a common fitness tracker problem. It provides graphs showing your Aerobic Training Effect and Anaerobic Training Effect, along with your Training Load, which is all very interesting, but there is very little information on what I’m supposed to do with the data or how to interpret it properly. Forced to search for more information, I was led to FirstBeat’s own website, but found I was really none the wiser after reading what was there.

It’s likely this data will be more helpful, or perhaps just more familiar, to athletes or those dedicated to certain sports, but for casual use, it goes too deep without enough explanation. Otherwise, the activity-related upgrades on the T-Rex Pro have improved it over the old model, but they would need to accompany other improvements to make it a highly desirable upgrade.

The T-Rex Pro uses Amazfit’s RTOS software and not Google’s Wear OS. It’s quick to respond, has smooth scrolling for the most part, and the menu system is logically laid out. It works through screen taps and swipes, plus the very sensible physical buttons. There are four, labeled Up, Down, Back, and Select. They do exactly what you expect, and are large enough to cope with gloved fingers.

It’s more reliable with notifications than Wear OS, although the text is basic and there’s no way to respond or interact with messages on the watch. There’s an effective always-on screen for each of the watch faces, I like the comprehensive weather reports and I’m sure climbers will appreciate the barometric data too, plus it controls music on my phone too. Best of all, I haven’t experienced any instability or software problems.

The Zepp app is the same as it is on the Amazfit GTR 2 and GTR 2e, and works with both Android and iOS. It collates your activity data, lets you customize the watch’s functions, select apps to send notifications, and perform software updates. It has remained solidly connected throughout my review period. Overall, the Amazfit T-Rex Pro’s software, and in turn the ownership experience, is very good.

If the software is good, what about the battery? It’s not so good, and definitely doesn’t live up to Amazfit’s promises, at least if you intend to use the features it contains. The company says the 390mAh battery — the same as the one in the T-Rex, unsurprisingly — will last for 18 days with typical use, and nine days with heavy use. With the always-on screen active, heart rate and stress monitoring, two 30-minute workouts tracked, and general notifications alerts, the T-Rex Pro’s battery lasted for six days. I don’t consider this to be heavy use, as I have not fired up GPS, or tracked hours of workouts.

I could turn off the always-on screen and heart rate monitoring, which would extend the battery life (although I’d be very surprised if it suddenly was able to reach 18 days), but what’s the point? You buy the watch to use the features, not pretend like they don’t exist. Amazfit’s claims of such long battery life are, in my experience on the T-Rex Pro and other Amazfit wearables, highly optimistic.

The Amazfit T-Rex Pro costs $180 or 139 British pounds, and is available to buy through Amazfit’s own website. It’s covered by a one-year warranty and comes with a 30-day trial period too.

The complete lack of imagination put into the T-Rex Pro’s design is frustrating. There is no need for it to look exactly the same as the previous model released over a year ago, especially when the original was hardly a design classic, and the hardware upgrades here are only modest. It comes across as a rather lazy update, from a company uninterested in attracting new buyers. If you didn’t like the T-Rex’s looks — and anecdotally, many people I spoke to didn’t — you won’t like the T-Rex Pro either.

There is nothing at all to say, “oh, it’s the new T-Rex Pro” on the outside and it’s a shame, as the software, performance, and activity tracking is very good. In many ways, the T-Rex Pro offers a superior general experience to a Wear OS smartwatch, and the low price makes it very tempting. Style aside, the main negative point here is the battery life. Six days of what I consider general use isn’t bad, but it doesn’t meet Amazfit’s claims, or match smartwatches like the Huawei Watch GT2 Pro, or most fitness trackers either.

Perhaps you’re not so caught up in the design aspect as I am and are after a reasonably priced, outdoor activity-focused smartwatch. In which case, the T-Rex Pro will do everything you want, just with more visits to the charger than Amazfit tells you.

The T-Rex Pro’s price is very competitive. For example, the Honor Watch GS Pro is 250 British pounds, and has very similar functionality, although the materials used give it a higher class feel. Our recommended smartwatches, without the toughness, all cost a lot more. The Apple Watch SE starts at $279, the Samsung Galaxy Watch 3 at $330, and the Mobvoi Ticwatch Pro 3 at $300.

If you aren’t worried about the tough exterior, Amazfit’s GTR 2e has most of the same features inside a more fashionable, slimmer case and costs just $140. If the smartwatch features are less of a concern, a fitness tracker may suit you better. If you like the G-Shock style looks, just get a G-Shock watch. The G-Shock Move GBD-H1000 is $400 and has extensive activity tracking features, plus it is properly tough.

Finally, the T-Rex can still be found for sale online, and it costs about $140 but can be found for less. Yes, the hardware additions are welcome, but if you just want a tough smartwatch and not spend too much doing so, it’s otherwise very similar.

The T-Rex Pro’s toughness means it’ll withstand considerable punishment, so if you are going to wear it in harsh environments, it shouldn’t break at the first sign of water or dust. Provided Amazfit continues to support the Zepp app and the software on the watch, it will last for a couple of years.

However I do think the design will date quickly, and the polycarbonate case will likely pick up scuffs and scratches over time if you do use it as intended, meaning you may feel the need to replace it sooner.

Yes, the T-Rex Pro may be very similar to the old model, but it’s still a well-priced, feature-rich smartwatch.

Google Pixel 6 vs OnePlus 9: Which should you buy?

Apple Watch Series 7 Review: The Only Smartwatch to Buy

Which phone should you buy?

Why Recycling Isn’t Enough to Solve Our E-Waste Crisis

The Best Fighting Games for PS5