Over the last year, Huami has ramped up its portfolio of fitness wearables, the most recent of which was the Amazfit GTR 2. The company has made a name for itself on the back of long-lasting battery life, a compelling feature set, and affordable price tags. Now, with the Amazfit GTR 2e, the company wants to reach an even wider audience.

The Amazfit GTR 2e takes on the likes of the Mi Watch Revolve and Realme Watch S Pro with its focus on design and wide activity tracking options. Find out in our full Amazfit GTR 2e review if that is enough to go up against more established competitors. 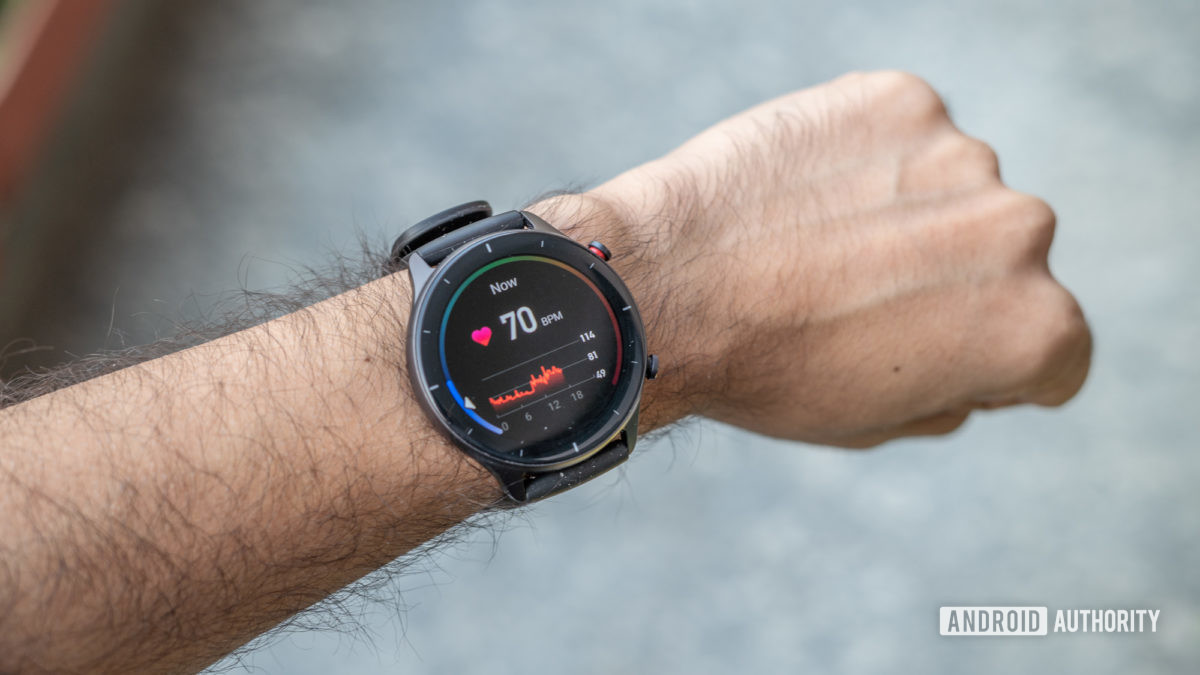 The Amazfit GTR 2e molds 2.5D curved glass over a titanium alloy case that looks way more premium than the price would suggest. The design is a clear leap over alternatives like the Xiaomi Mi Watch Revolve and the Realme Watch S Pro thanks to its deliberate and well thought out aesthetics.

The 1.39-inch display stretches nearly all the way across with limited bezels around the screen. This makes the watch small enough to discreetly fit under a shirt cuff and won’t look out of place dressed up either.

The AMOLED panel is as vibrant as they come. The ambient light sensor works great, and I had no trouble viewing the display outdoors on a sunny day despite the glare.

Dual pushers along the side of the watch offer excellent tactile feedback. While the second button defaults to the activities menu, it can be configured to access any of the applets installed on the watch. 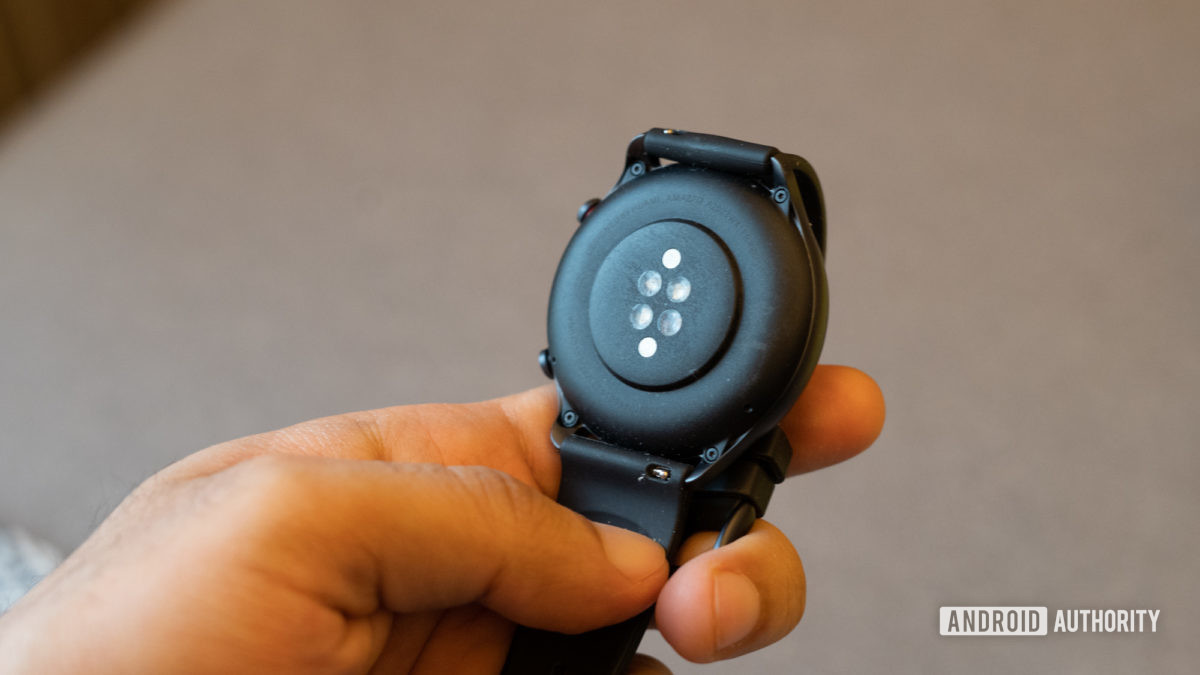 Flip the Amazfit GTR 2e over and you’ll spot the sensor array embedded in the plastic underbody. Between the heart rate sensors, SpO2 monitor, pogo pins for charging, there’s nothing out of the ordinary here.

See also: The best smartwatches you can buy

The watch straps use a standard pin-buckle mechanism and can be easily swapped out, which is well and good since the included silicone straps are nothing special. Over a week of use, the silicon strap attracted a whole lot of sweat stains and dirt. 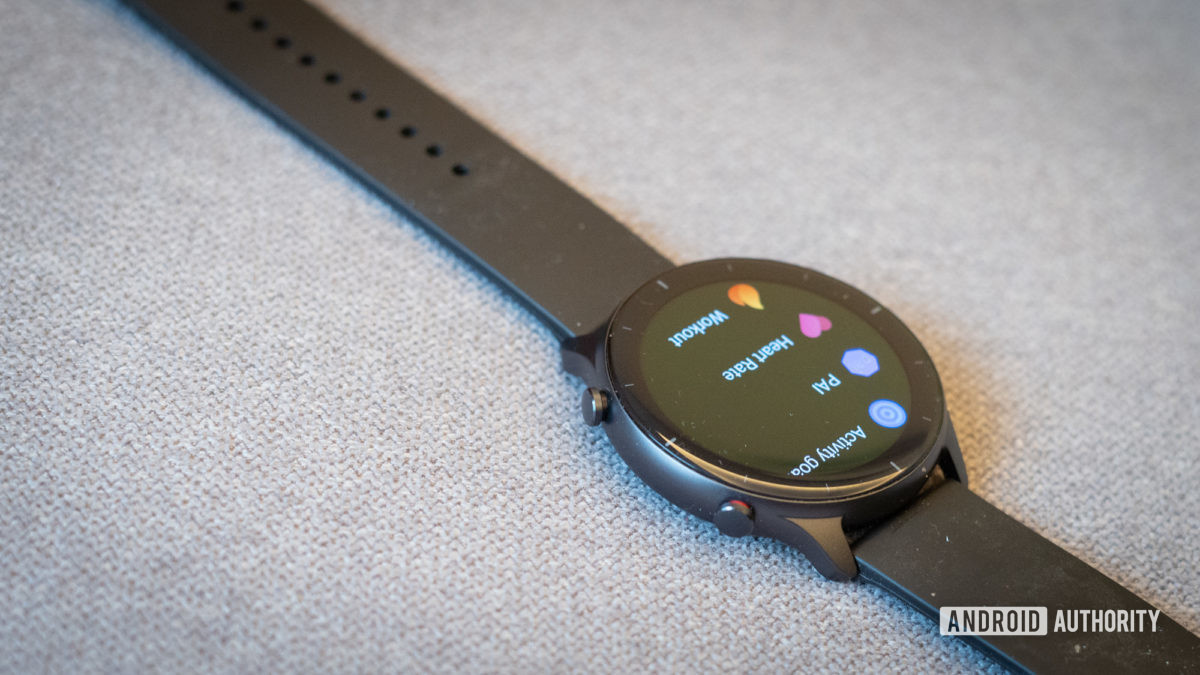 Where the Amazfit really excels is battery life. While the 471mAh cell is consistent with most other smartwatches on the market, the battery life is rated for 24 days and if my testing is anything to go by, that sounds pretty darn accurate.

After ten days of use, the battery indicator is still ticking along at just short of 60%. Switching on the always-on display puts a big dent in battery life, but despite that, you should still be able to go a couple of days between charges.

Amazfit has done a really good job at making a premium piece of kit that doesn’t break the bank. 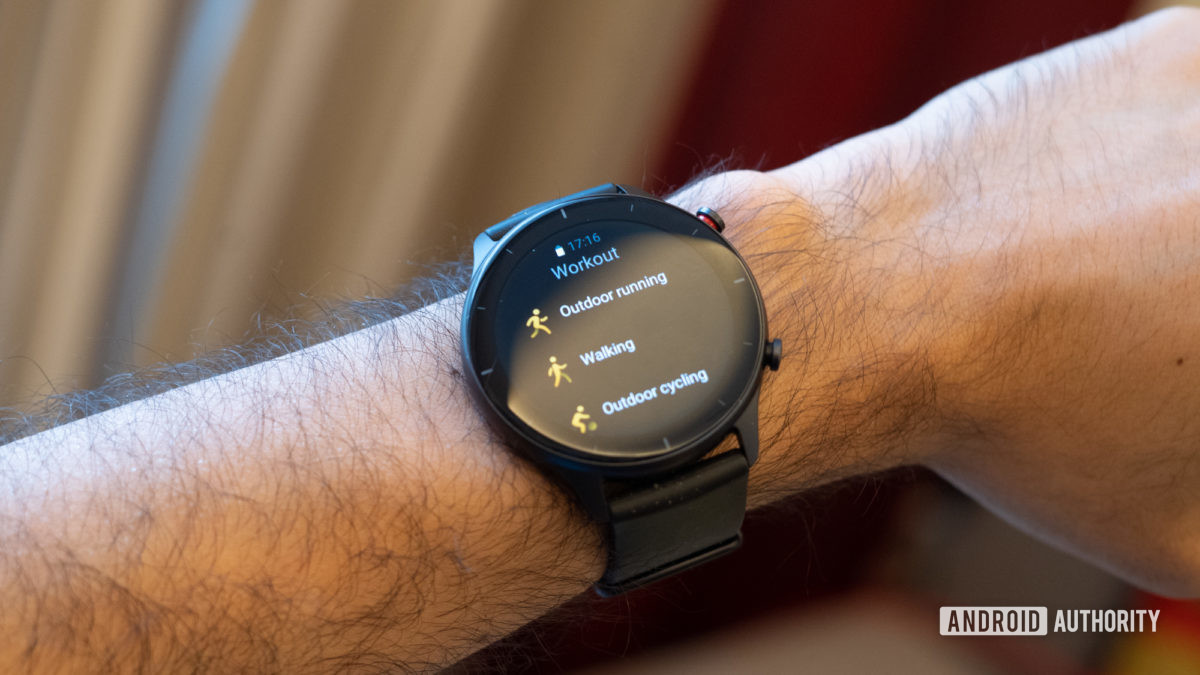 Fitness features across wearables at the entry-level price range are fairly commodified. However, the Amazfit GTR 2e goes a step ahead by including over 90 different sports modes that should cover almost any activity you might want to track. The essentials like walking, running, and cycling are all here, and so are more niche activities like parkour and belly dancing. I wouldn’t really count fishing as a particularly tiring activity, but hey, even that is covered.

Elsewhere, the watch is waterproof down to 5ATM which means you can handily take it along for a swim.

A smart recognition feature is included that will automatically recognize and categorize outdoor running, treadmill runs, walking, outdoor cycling, pool swimming, and elliptical training. The feature worked as advertised when I tested out the watch over brisk walks.

Coming back to activity tracking, I went back to my trusty Fitbit Ionic to compare stats. As with the Mi Watch Revolve and Realme Watch S Pro, GPS tracking continues to be the Achilles’ heel.

While the other two watches didn’t latch on to a GPS signal at all, the Amazfit did a lot better here. However, even the GTR 2e lost its signal over the course of the activity, and if you are planning to train in a normal city environment with buildings and foliage around, the GPS tracking might not cover it.

I found step and heart rate tracking to be right in line with the Fitbit Ionic, within a small margin of error. Over the course of brisk walking, the Amazfit GTR 2e recorded a maximum heart rate of 108, while the Fitbit measured a peak of 106. I like the deep insights offered up by the activity page — particularly the cadence, speed, stride, and altitude graphs.

The GTR 2e offers 24-hour heart rate monitoring and gives granular insights into heart rate zones. This is par for the course, and the measured resting heart rate figure of 55bpm was in line with my Fitbit.

Sleep tracking was very accurate on the Amazfit GTR 2e with the watch calculating wake up times within a minute or two of me actually waking up. There are enough insights here should you want to improve your sleep habits. Amazfit has also added sleep breathing analysis using the SpO2 monitor to help detect signs of apnea, which is a very welcome addition.

The watch assigns you a score out of 100 based on blood oxygen levels and sleeping patterns. During my time with the watch, I did not receive any specific notifications but a cursory glance at the data showed a score of 98, which should be perfectly adequate. Further, the app also gives suggestions on how to improve sleep breathing quality.

The Amazfit GTR 2e goes a step ahead of other entry-level wearables with tons of workout modes and tracking features.

You can also do a spot analysis any time during the day using the dedicated applet on the watch. However, despite Amazfit’s claims of offering deep sleep breathing analysis, it’s worth noting that the feature is in beta. Additionally, the wearable is not a medically certified device which means that you should treat the data presented here as a broad indicator of general health status.

Finally, the watch includes stress measurement based on heart rate data as well as a holistic health tracking metric dubbed PAI. PAI, or Personal Activity Intelligence, uses multiple data sources like resting, maximum heart rate, and age to give you a weekly score out of 100. Based on a rolling seven-day basis, the score is designed to give you a better overall look at fitness instead of fixating on individual activities. 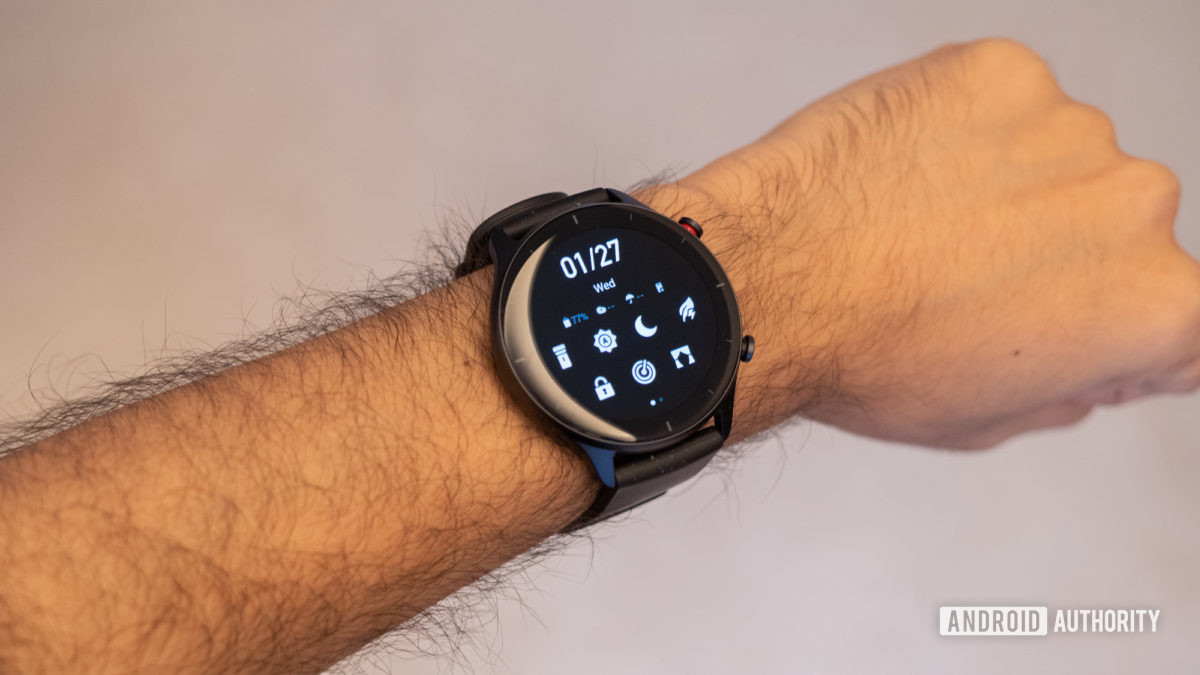 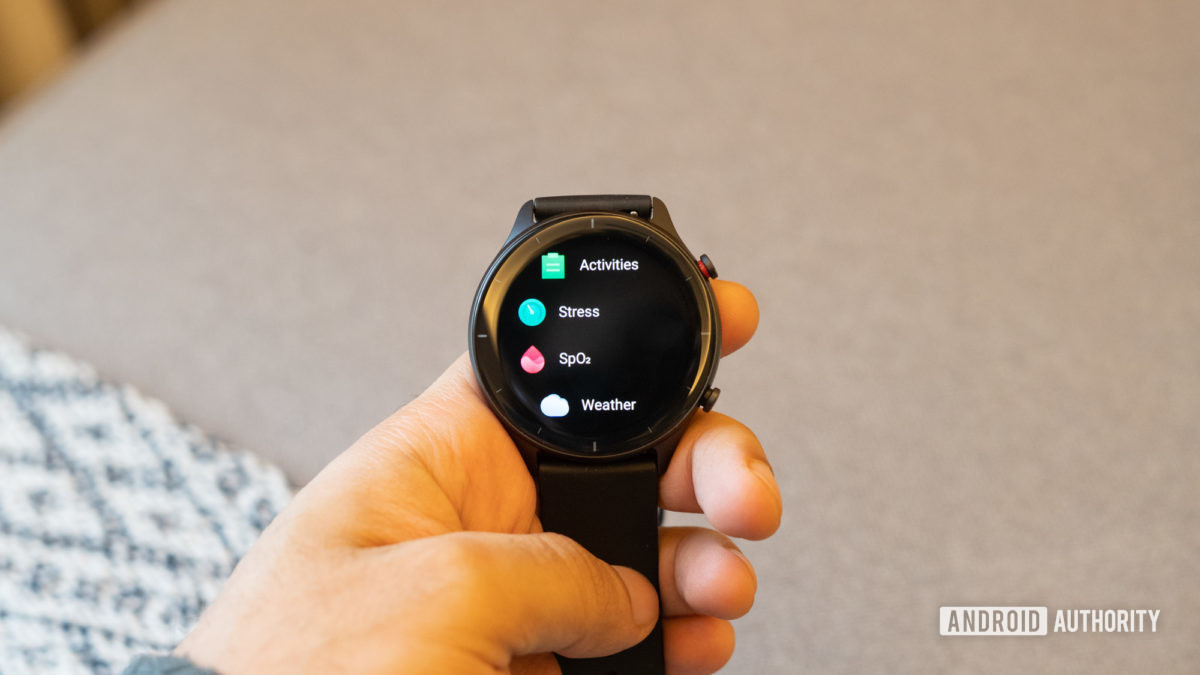 The interface on the Amazfit GTR 2e is a mix of UI elements cribbed from Wear OS, and a radial app dialer. While the former is tried and tested, the latter is an excellent addition that makes scrolling through apps quick and effective.

Amazfit claims to have about 50 different watch face options. Swiping to the left brings up a quick view page for calendar items, alarms, weather, and more. Meanwhile, on the right are configurable widgets for key elements like fitness, heart rate, and weather. Finally, swiping from the top and bottom brings up quick settings and notifications respectively.

Smart functionality is limited to notifications and music playback.

The Amazfit GTR 2e doesn’t have much in the form of smart functionality beyond viewing notifications and controlling music playback. Notifications still aren’t expandable, and I found music playback controls a bit iffy as the watch didn’t always pick up music playing on the phone.

Compared to the GTR 2, the GTR 2e nixes offline music playback as well as Alexa support. The watch still includes basic voice control for activating watch functions, but I didn’t find this particularly useful or effective and kept voice control switched off for better battery life.

Amazfit’s recently rebranded Zepp app is a mix of quality insights and poorly placed elements. While the homepage will give you daily insights, getting access to historical data and records requires you to tap an overflow menu, which brings up a long list of supported features. Poking around the long list will bring you to sub-menus for exercises, heart rate, and more.

As someone who switches out fitness watches fairly often as part of my job, it is important to me to have a single resource where I can push out my workout history. The Amazfit does an excellent job here by allowing quick sync with both Google Fit and Strava in addition to WeChat and the Relive app.

Read Also:   The Best Games: What You Should Be Playing Now

The Amazfit GTR 2e is priced at Rs. 9,999 in India and $139.99 in the US, pitting it against similarly priced alternatives like the Mi Watch Revolve and the Realme Watch S Pro.

The Amazfit GTR 2e doesn’t quite up the ante when it comes to sports wearables. However, what’s there works reasonably well. The sports modes cover practically every imaginable activity, the design is stunning and battery life, in particular, stands out. You can, however, get better options if you want more smart features than fitness tracking.

For better or worse, the feature set is mostly identical between all three, and your choice will likely come down to the design and efficacy of the implementation.

Personally, I prefer the understated elegance of the Amazfit GTR 2e over the gigantic size of Xiaomi’s watch and the butch sports watch look offered by the Realme. Additionally, while not perfect, GPS tracking was a marked improvement over either of the alternatives. 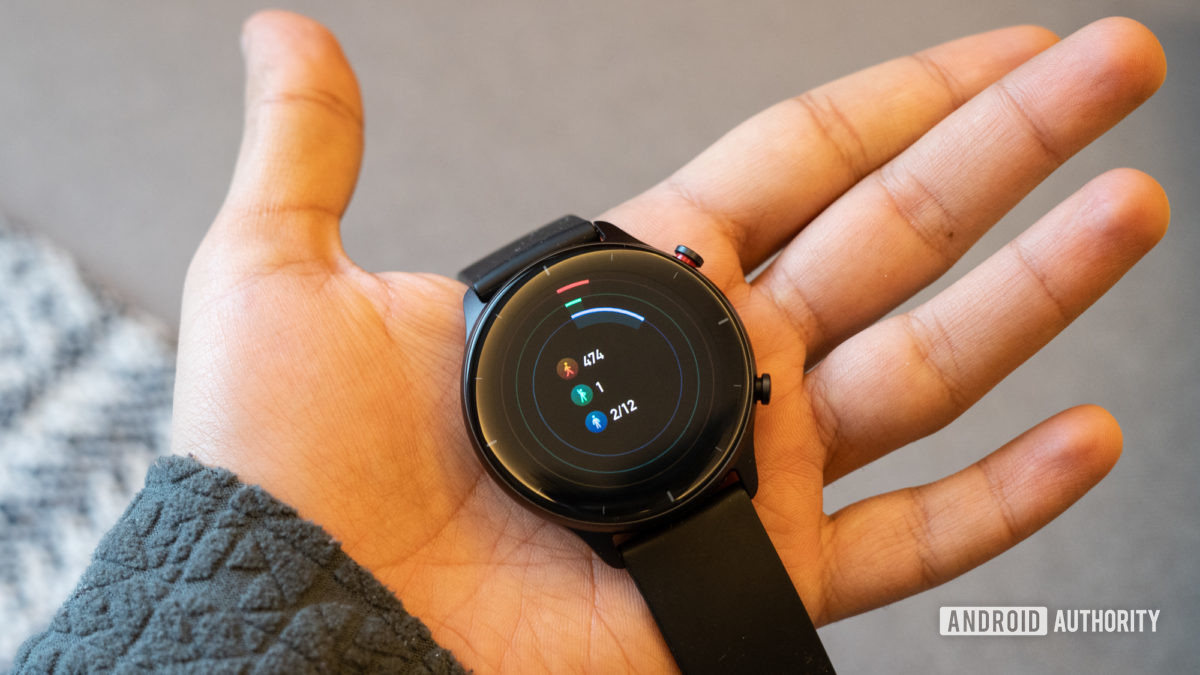 The Amazfit GTR 2e is far from perfect, but it works well enough as an entry-level fitness wearable. The included sports modes offer quality insights, and with a better line of sight, GPS too should work better. Add to that the extended battery life and you have a great base to work off.

However, if you want more smartwatch and less fitness wearable, the Amazfit might not cut it for you. The feature set is too limited, and the Wear OS packing Oppo Watch is a much superior device if you want to get actionable notifications and third-party apps.

Despite some of its issues, the Amazfit GTR 2e is definitely worth a look at if you’re in the market for a budget fitness wearable.

For more reviews from Android Authority, sign up below to receive all of the latest device testing and analysis straight into your inbox.

Get all the latest reviews

Join our most passionate readers to get instant access to tech reviews as they arrive!