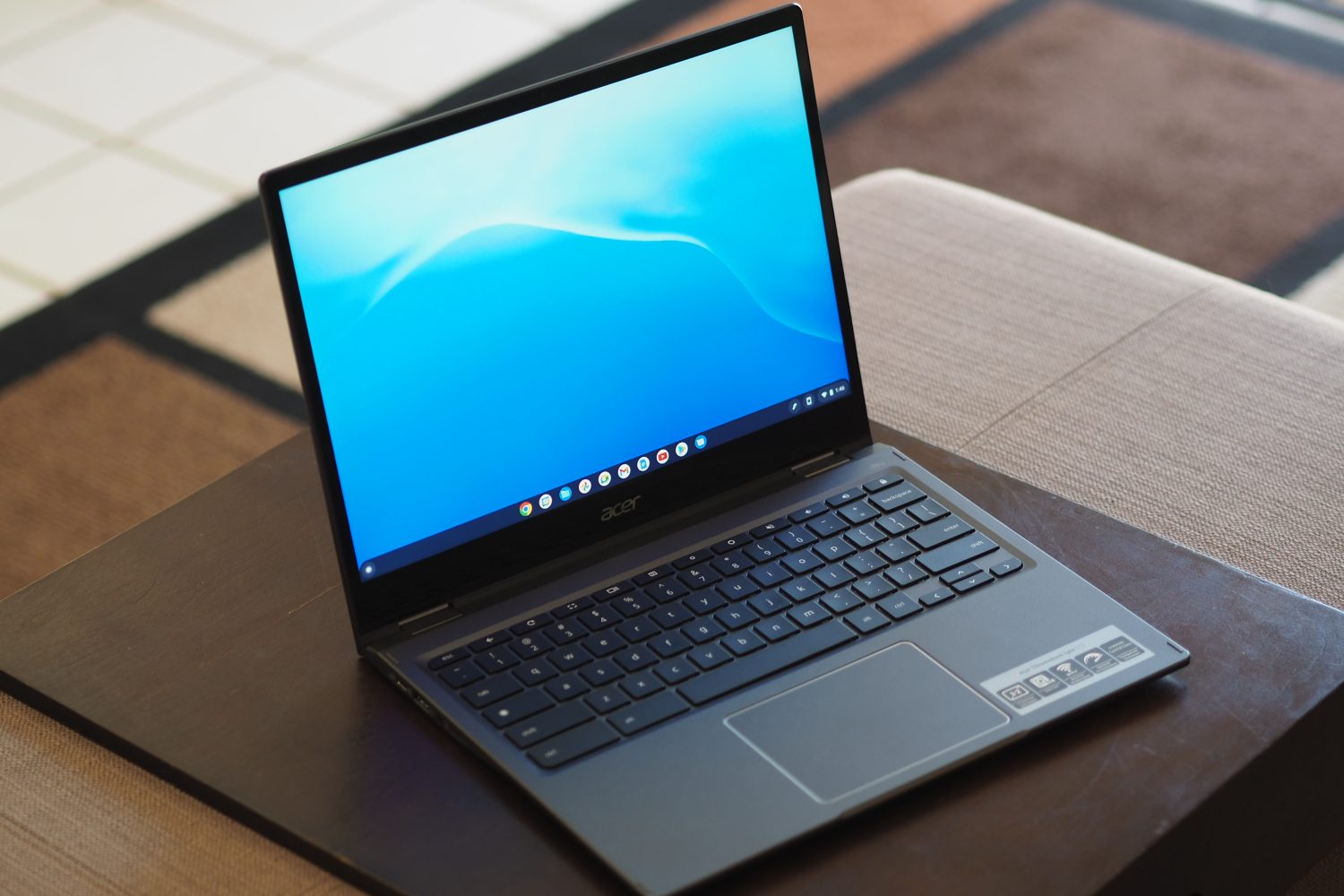 “The Acer Chromebook Spin 513 hits all the marks as a premium Chromebook with all the bells and whistles.”

2-in-1 convertible Chromebooks have completely caught up with their Windows competition. Active pen support, larger 16:10 and 3:2 screens, and higher resolution screens – they’re finally up to the job.

Acer’s updated Chromebook Spin 513 is a classic example, offering an efficient and fast MediaTek ARM processor and a bright, crisp 3:2 display. Acer wanted us to mention the model number of our review unit, the CP513-2H, noting that it’s the second generation of the model.

My review unit is priced at $615 and features the MediaTek Kompanio 1380 8-core processor and a 13.5-inch 3:2 2K (2256 x 1504) IPS display. I found the 2-in-1 to be a fast contender in the Chromebook space, with enough battery life to stand out. It’s a solid offering for Chrome OS fans who want the ability to flip their screen to tablet mode and write or draw on the screen.

A combination of sandblasted and anodized aluminum in the upper and lower chassis covers and plastic in the keyboard creates a laptop that’s supposed to be durable on the outside but lightweight. I found the lid slightly bendable, the keyboard to demonstrate some flexibility, and the bottom chassis sturdy.

It wasn’t glaring, however, and the overall build quality was pretty sturdy for a $600 laptop. It’s equal to similarly priced Chromebooks, like the slightly larger Acer Chromebook Spin 514, while it’s less robust than the slightly more expensive HP Chromebook x360 14c. The hinge was loose, allowing the lid to be opened with one hand but being a little wonky in a few of its four modes: clamshell, tent, stand, and tablet.

Aesthetically, the Chromebook Spin 513 is a bit plain, with a plain dark gray chassis with no ornaments and simple lines. The rear edge is angled and there’s flair to the front sides, but otherwise it’s a typical laptop design. The Chromebook Spin 514 is a little sharper in its silver color, but it too is minimalist. That seems to be the trend with Chrome OS laptops (and laptops in general, frankly), as the HP Chromebook x360 14c is another one that’s simplistic in its aesthetics.

The Chromebook Spin 513 has no minimal bezels, especially at the bottom, where the chin is massive by contemporary standards. Given the slightly larger 13.5-inch 3:2 screen, it’s a bit deeper and a bit wider than other 13-inch laptops. It measures 0.64 inches thick and weighs 2.83 pounds, which is thin and light enough to be easy to carry.

The Acer Chromebook Spin 513 is built around the eight-core MediaTek Kompanio 1380 processor, paired with an Arm-Mali G57 MC45 five-core GPU. The processor is designed to be fast enough for the lightweight Chrome OS while providing long battery life. My review unit was also configured with 8GB of RAM, a ton of memory in a Chromebook, and 128GB of slower eMMC storage.

We can’t run many of our benchmarks in Chrome OS, but I was able to test the Chromebook Spin 513 in the Android version of Geekbench 5 and the Web Speedometer 2.0 benchmark. In Geekbench 5, the MediaTek CPU scored 936 in single-core and 3,438 in multi-core. It’s quite competitive with other ARM-based Chromebooks such as the HP Chromebook x2 11 with its Qualcomm Snapdragon 7c which scored 599 and 1,718.

I found the Chromebook Spin 513 to be very fast in everything I threw at it.

Subjectively, I found the Chromebook Spin 513 to be very fast in anything I threw at it. I could open multiple Chrome tabs and run a few Android apps without things slowing down, largely due to the large amount of RAM. Even Android games were fast, with titles like Asphalt 9 play without noticeable stuttering.

One of the most impressive features of the laptop was its 13.5-inch 3:2 2K (2256 x 1504) IPS display. The higher aspect ratio is great for productivity, and the panel was sharp enough that I had to hunt for pixels. My colorimeter is not supported in Chrome OS, so here are my subjective impressions.

First, I found the display to be more than bright enough for all my work environments, only outdoors in direct sunlight being unusable. Acer quotes 360 nits for the display, and I think it hits that number, if not more. Then the colors were plentiful and looked natural, without oversaturation. Finally, the contrast seemed high enough that blacks appeared black and not gray, and text on a white background appeared.

Tablet mode works very well thanks to the 3:2 aspect ratio.

The display was comfortable in tablet mode thanks to the 3:2 aspect ratio which is closer to a sheet of paper. The screen is touch-enabled and works well, and there’s optional USI stylus support.

Sound is delivered through two downward facing speakers located at the front of the chassis. It was mid volume with clear mids and highs and zero bass. You will need headphones or external speakers for your Netflix binge and music listening pleasure.

The Chromebook Spin 513’s keyboard is well-sized, with just-big enough keys and ample key spacing. The switches have a solid click and require more pressure to engage than most. There’s comfortable bottom-end action and plenty of travel. Overall it’s a fixable keyboard that may not be among the best you’ll find on high end laptops but it’s on par with most laptops I’ve had tried that cost less than $1,000.

The touchpad is adequately sized for a 13-inch laptop, although there is room for a larger version. It’s covered in Corning Gorilla Glass, which is a nice touch at this price, and it’s smooth and comfortable with precise support for all of Chrome OS’ multitouch gestures. The buttons have a responsive click that’s just a tad too loud.

As the laptop industry moves towards Full HD webcams, you don’t necessarily expect that from a budget laptop. As a result, the Chromebook Spin 513’s webcam is a 720p model, though it still delivers bright, clear images.

Chrome OS is an efficient operating system, and the MediaTek processor also promises greater efficiency. That should translate to strong battery life, even given the relatively small 36 watt-hour capacity.

In our web benchmark that scours a series of popular and complex websites, the Chromebook Spin 513 clocked just over 11 hours, a solid performance behind the HP Chromebook x2 11 with its slower Qualcomm processor. That’s a lot longer than the Intel Chromebooks in our comparison group could handle. Then, in our video test that loops a local Full HD avengers trailer, the Chromebook Spin 513 lasted around 12.75 hours, another solid score that led the pack.

Battery life was a real strength of the Chromebook Spin 513.

The Acer Chromebook Spin 513 strikes a compelling balance between performance and battery life. It’s neither the fastest Chromebook you can buy nor the most durable, but it’s a 2-in-1 Chrome OS that doesn’t require you to compromise.

The laptop had few outright weaknesses, with decent build quality considering the $616 price tag, a very nice screen, and attractive if somewhat plain aesthetics. It’s a great option for anyone looking for a 2-in-1 Chrome OS.

I don’t know of any 2-in-1 Chromebooks in the same price range and with the same high resolution 3:2 display. from Acer The Chromebook Spin 713 is an option, though it’s a bit older, more expensive, and stuck with Intel’s 1st Gen processor.

The HP Chromebook x360 14c is another option, around the same price with decent performance but less battery life, and it still works with a 16:9 Full HD screen.

Finally, if you want to go the detachable tablet route, consider the HP Chromebook x2 11. It’s cheaper, has a smaller, sharper 11-inch 3:2 2K display, and has good battery life too. . However, his performance can’t quite keep up.

The Acer Chromebook Spin 513 was sturdy enough to last years of typical use, and its components should keep up with Chrome OS. Its one-year warranty is typical and decent for a laptop in this price range.

The best waterproof Bluetooth speakers for 2022