A Woman And Her Service Dog Were Booted From A Private Compartment. Was It The Right Decision?

Most people go out of their way to accommodate people who are clearly in need of special assistance in public – and since the majority of people who aren’t terrible psychopaths love dogs, I would guess that goes double for people accompanied by service dogs out in the wild.

Things can get complicated, though, if you suspect the other person is trying to take advantage – and if you have a legitimate accommodation need of your own.

This woman was traveling on a train overnight and, wanting to be comfortable, booked herself a compartment of her own for the trip.

Additional relevant information is that OP is allergic to dogs.

Sorry for the long title I didn’t know how else to say it. I also know that it makes me sound like an evil witch but please hear me out.

Some relevant information is that I am 18(f) who has allergies to dogs. I also live in an area in which there are overnight train rides. I had to take one so I could see my friends and celebrate my 18th.

I booked a compartment for the train ride so I would be comfortable.

An hour or so into her ride another woman – with a dog – entered her compartment without knocking. When OP asked what she was doing, the woman replied that there was enough room for both of them and she needed the space for her dog.

OP said again that it was her compartment and she wanted the other woman to leave, at which point the woman accused OP of being ableist.

OP explained it was because she’s allergic to dogs.

About an hour in a young lady like myself came with a service dog and opened the door to my compartment and came in. It wasn’t locked because I had forgotten.

I asked her what she was doing and she replied with “There is more than enough space and I need the extra space for my dog” I was a little annoyed to be honest.

I replied “I’m sorry but I’m going to have to ask you to please leave and not stay” “It is because I have a disability isn’t it” “No it is because I’m allergic to dogs.”

Then the other woman challenged how allergic she was until eventually a train employee stepped in, forced the other woman to leave, and apologized to OP for the inconvenience.

“Are you deadly allergic” At that point it sounded menacing.

“No but I would rather not be sick when I arrive. Besides you should have paid for an compartment since you knew you would need one”

She started yelling that I was an ableist asshole. One of the workers came past and asked what was going on.

I provided proof that I booked the compartment and told her that I was allergic to dogs.

The worker then asked the woman to leave and apologised to me on the trains behalf. I told her it wasn’t her fault and all was good after that.

Some of her friends think she should have just left the other woman to the compartment alone and moved, but OP feels like she’s the one who thought ahead and paid extra, and there was no reason for her to be ill and/or inconvenienced.

Now a lot friends think I should have just let her and moved myself to a different part of the train since she needed the extra room for her dog.

Does Reddit think she was wrong not to cede her compartment to someone claiming they needed a reasonable accommodation?

The top commenter doesn’t think OP is being rude or ableist, just reasonable. 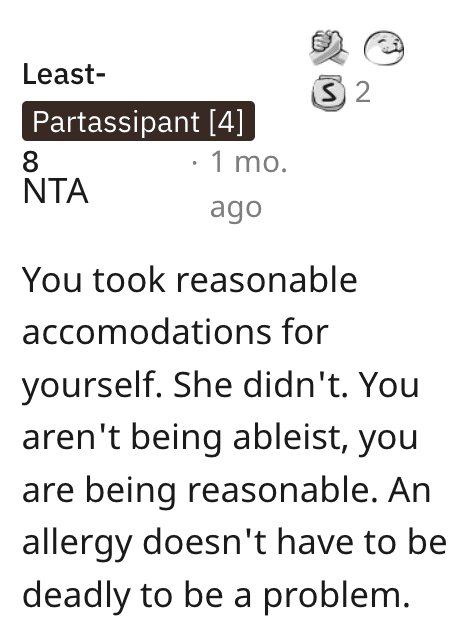 This person thinks OP was perfectly fine with all of her responses.

The woman was trying to use her disability to gain favors she didn’t pay for. 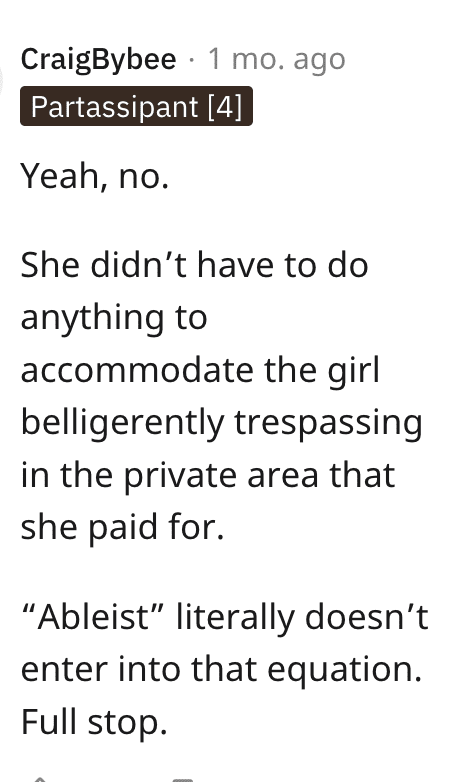 Louder for the people in the back: the world doesn’t owe you anything. 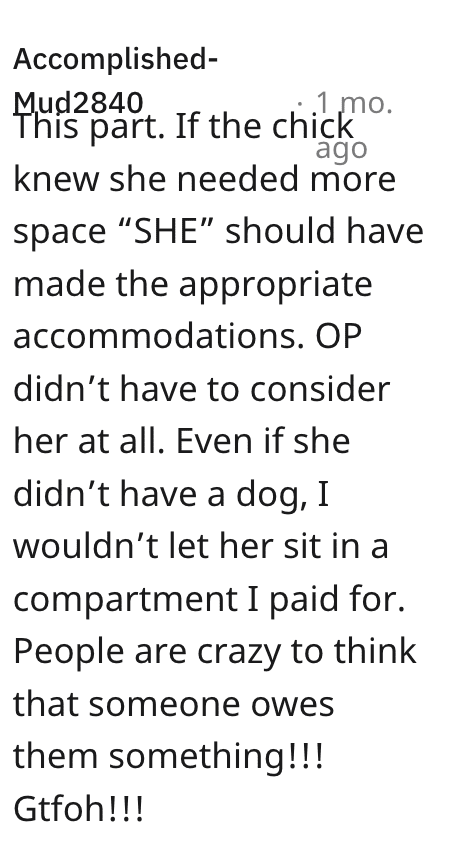 In short, dog woman is a disgrace. 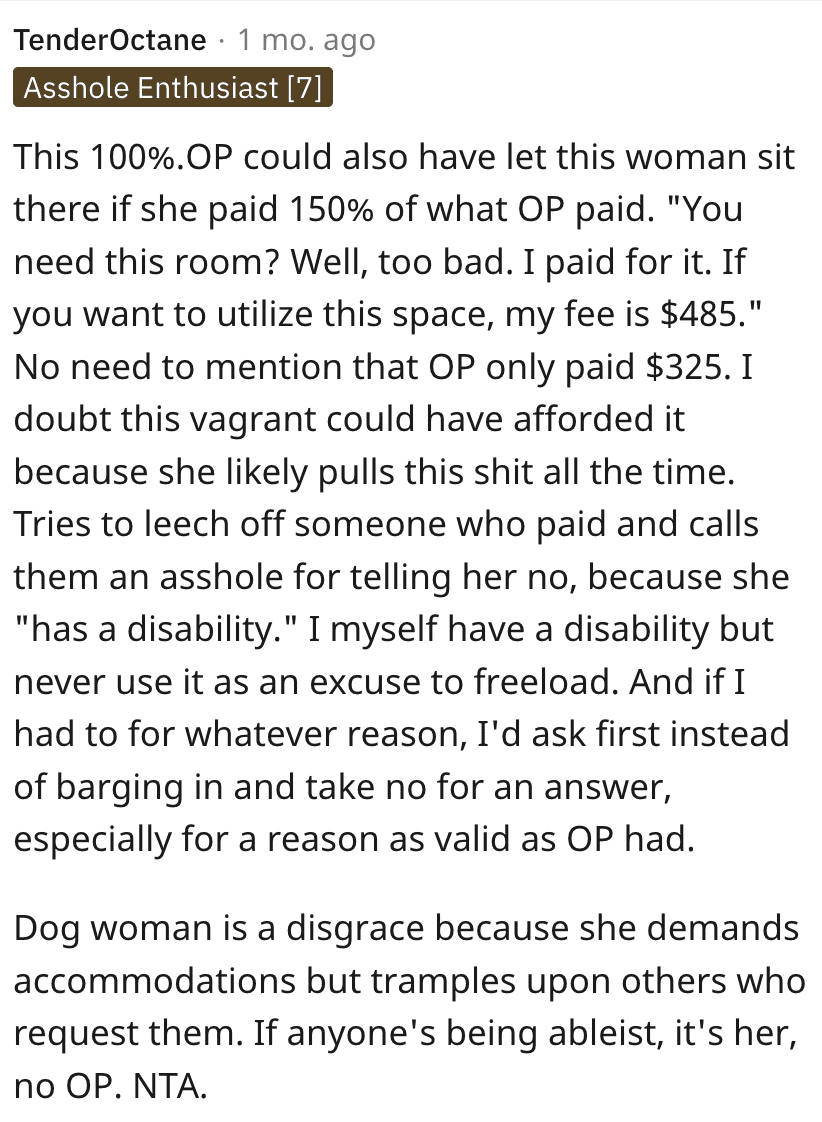 Yeah, I’ve gotta agree with OP and Reddit on this one – you don’t ask a fellow passenger for a reasonable accommodation when you could have easily made one for yourself with a little money and forethought.

What are your thoughts?