A Dressmaker Ignored the Mother of the Bride’s Opinions. Was He Wrong?

When it comes to wedding dresses, there are bound to be some strong feelings…and I’m not only talking about the bride who will be wearing it!

Take a look at this story from the “Am I the A**hole?” page on Reddit and see if you think this dressmaker acted like a jerk.

A few months ago I got a request from a bride (28F, who I will be calling ‘Maddie’), she was really nice and wanted to see if I did alterations as she wants to wear her mother’s wedding dress but wanted it altered to fit her and wanted some changes done to the dress.

She sent me a pic of her in the dress as well as descriptions and image descriptions of what she wanted and we agreed on a price, normally I would ask her to ship the dress to me but she actually lived a few towns over so we set up a date to meet up, so she can give me the dress and I could show her the sketches and mockups.

(just to clarify, the dress belonged to her mother that passed when she was 15, the mother I mention in this story is her stepmother)

I get to the cafe first and sit down, about 15 mins after we were supposed to meet Maddie and her mother walks in, Maddie is really apologetic and started explaining that she and her mother were coming here after they had gone shopping for wedding jewellery and her mother didn’t want to leave when they had to. I said it was fine.

She pulled out the dress and showed it to me, it’s a beautiful vintage dress, her alterations aren’t too difficult, the biggest change is that she wanted to change the neckline and style of the sleeves. The thing is, every time I would tell Maddie something about the process or suggest something and no matter how Maddie reacted, I always got huffs and eyerolls from her mother.

Maddie went to the bathroom before leaving and her mother came up to me, told me that she didn’t like a few of the ideas I proposed and wanted to suggest something herself and pulled out a list, I stopped her and told her that any suggestions or changed would need to be told to me by the bride, so she would have to tell Maddie her ideas.

She got visibly annoyed and told me that I ignored her the whole time and as the mother of the bride she should have an opinion, I told her that Maddie was my customer not her. She then tried to tell me that it’s her old dress, I told her that I know it’s not, it’s Maddie’s dead mother’s old dress, not hers, she left in a huff.

When Maddie came back from the bathroom, I told her what happened she didn’t seem too surprised but was frustrated, she apologised and thanked me for telling her and that she cant wait to see her finished dress.

I was talking about this to a fellow designer who specialises in bridal wear and she told me that I should have involved the mother in the beginning and that I was just being rude to her, is should have taken the list and tried to pitch the ideas to Maddie.

I really didn’t think what I did is wrong but I don’t get wedding commission often so im more used to working with cosplayers, maybe there are some unspoken rules I didn’t know about, so AITA?”

This reader said this guy was NTA at all in this story. 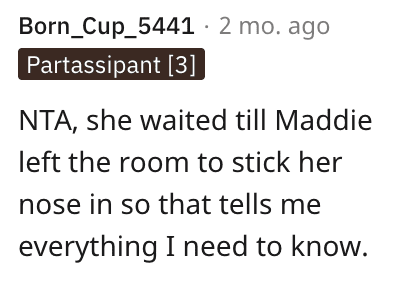 And another Redditor said they definitely wouldn’t have been happy if they were the bride and things had gone the way the mother wanted. 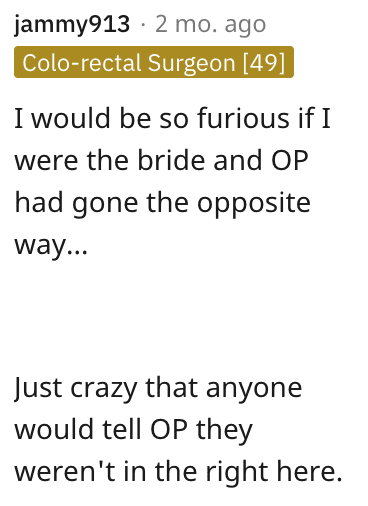 And this reader said that this guy was NTA and that THE BRIDE is the client here, not her mother. 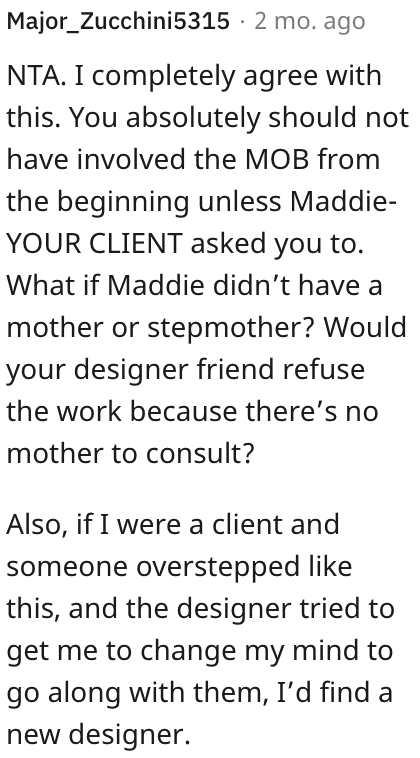 People Share the Non-Traditional Beauty Standards They Are Attracted To