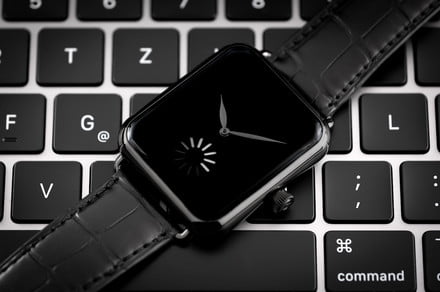 Right from when it launched the first Swiss Alp mechanical watch five years ago, luxury watch maker H.Moser & Cie has repeatedly poked its tongue out at the high-tech Apple Watch by making no secret about taking inspiration for its shape from Apple’s smartwatch. But for the final, super limited version of the Swiss Alp, it has gone beyond the shape to include even more cheeky references to the downsides of smartwatch ownership.

The Swiss Alp Watch Final Upgrade utilizes the shape of that most frustrating of icons, the downloading spinner, for its second counter, set at the six o’clock position on the dial. Despite its total blackness the dial is not a screen, and is instead made using Vantablack technology — an artificial, totally black material which absorbs 99.9% of visible light — to mimic the deep black color of a depressing, inactive screen. The “screen off, loading” style is completed by blacked-out hands. The black screen and loading icon are annoying reminders that we’re waiting for something to happen, but as the Swiss Alp Watch Final Edition is mechanical, it always tells the time. Even the watch’s full name takes a knowing swipe at the tech industry.

How about the watch itself? The 38mm case is made from stainless steel and finished with a diamond-like coating (DLC) and matched to a black alligator leather strap. The dial is covered by sapphire crystal and the movement can also be seen through a sapphire crystal window on the case back, while the second counter is a shaded disc set under the dial, exposed through tiny openings. Inside the case is an HMC 324 hand wound movement with 27 jewels and a power reserve of 96 hours, or about four days. There’s a power reserve indicator visible through the case back too.

In its press release, H.Moser & Cie’s CEO explained the inspiration for the design came from a customer and friend of the brand, and was approved immediately after being pitched. The Swiss Alp watch was the 200-year old company’s mischievous response to smartwatches in 2016, when it embraced the new era of design, but matched it with cutting-edge mechanical movements, and exciting new tech like Vantablack. This final version is the ultimate expression of the Swiss Alp line’s playfulness.

Yes, the final version. This will be the last Swiss Alp watch produced and only 50 will be made, making it very limited. H.Moser & Cie isn’t a large scale watchmaker and its hand made watches are always produced in small numbers, and the price reflects this exclusivity. The Swiss Alp Watch Final Upgrade will cost $30,800, but what a wonderful mix of luxurious traditional watchmaking and geeky tech appeal it is.