23 Food Service Workers Recall the Pickiest Orderers They Had

Remember that scene (or scenes) from When Harry Met Sally when she orders her food and it’s like, incredibly specific and takes her two or three minutes to finish? And the waitress is like…sure, lady.

If you’ve spent any time at all working in food service, you’ve had customers just like that – so many, in fact, that it would take a lot to leave one sticking out in your mind.

Which is why you’re going to want to read about these 23 orderers so memorable their servers will never forget them.

There’s something really creepy about this.

I don’t think I want to try it.

Baristas/Bartenders/general food service: what’s the weirdest thing you were ever asked to make?

As a barista, someone asked for a shot of espresso with 7 pumps of orange flavoring.

And he downed it one gulp. This was absolutely not his first time having this

With a small shot of caffeine.

While working at Dunkin:

They specified they wanted the liquid, pure corn syrup sugar too.

The cup was about 2/3 full before putting a drop of coffee in.

Thinking about it still makes my stomach turn.

Also, she can have salt.

While at Five Guys this lady wanted fries but said she couldn’t have sodium. I told her we could make her fries without salt to which she replied “I want the salt, just not the sodium.”

Sure, lemme just go in the back, pull out my chem set, and separate this compound https://t.co/Vxag6twHGS

Though this is a crime against burgers.

A woman at Big Larry’s once asked to speak with the cook so I came to the counter to talk to her and these were her exact words:
“I want my burger burnt. I cannot stress it enough. I want it. Hockey. Puck. Burnt.” https://t.co/CTcTmGTftV

I feel sorry for her, to be honest.

I’m from the Midwest and still no.

Once a lady asked for extra sauce for her blueberry pancakes, so I came back with more syrup.

She goes “Ohhh sorry— I wasn’t specific. Can I please get a side of ranch?”

A guy came in every Saturday and wanted a lager top (beer with a bit of lemonade on top) but to protect his masculinity he would order a beer out loud and then do this elaborate signal indicating a squirt of the soda premix. Men are screwed up.

She’s not supposed to have coffee, but she misses the taste.

a sweet old man that would ask you to fill a mug with some coffee, dump it out, and then fill it with hot water so it just very faintly tasted like coffee… never charged him for it

I owned a Ben and Jerry’s where we made the Vermonster with 20 scoops of ice cream and like 20 scoops of toppings. I. Have. Seen. Some. Shit.

That would be cool, but unlikely.

I once was a waitress at a pretty fancy restaurant frequented by celebrities and those rich influencers. The things they ordered smh. From fat free water to caviar “but please make it not taste like fish”, I had to refrain from laughing out loud so many times

But you know no good can come of the answer.

Someone I know once served someone who wanted a ‘pizza funghi’ (just mushroom pizza) ‘without the mushrooms’. My friend replied ‘so a Margherita?’, but the person INSISTED on ordering – and paying extra for – a no-mushroom, mushroom pizza.

Remember when we sold those huge Starbucks cups/planters? A customer had a free drink (mobile order) and asked for a java chip with 100 shots, 100 frapp pumps, one hundred pumps of everything in this cup. it took 30 minutes. On thanksgiving. During peak. pic.twitter.com/NoJM3BZ4qm

I love mayo, but this is…excessive.

when i worked at subway a woman asked for only mayonnaise on white bread. doesnt sound too weird right? except she had me put nearly the entire bottle of mayo on it and at first i thought she was just fucking w me but she sat down after the transaction and just.. ate it.

Just saying what the server was dying to blurt.

The Sweet & Lows after a mountain of sugar lol.

i had three minutes left in my shift when i had to make this MONSTROSITY for some girl in fifth grade, i was so PISSED pic.twitter.com/58bmAJ9LZe

When I worked in a gelato shop a woman came in and ordered a lemon sorbet milkshake. I tried to explain to her the sorbet was non-dairy and she may not like it, and offered to let her taste it first. She explained she knew exactly what she asked for, she was just pregnant.

I would have grabbed that shizz!

A guy trying to impress his date ordered a very expensive bottle of wine. I opened it and poured and he told me it was no good because there were bubbles in it. The wait staff drank it with lunch.

So am I, as someone who likes sushi.

Waitress at a sushi restaurant. Once had a couple ask for a bowl of butter. They spread said butter on top of each piece of sushi and then sprinkled them with artificial sugar. I – https://t.co/agHDUpFmrn

But they’re definitely not.

Applebees – Dude asked me to boil his Dr. Pepper in the microwave till it boiled.

That doesn’t even sound possible.

Frappuccino with a double smoked bacon sandwich blended in 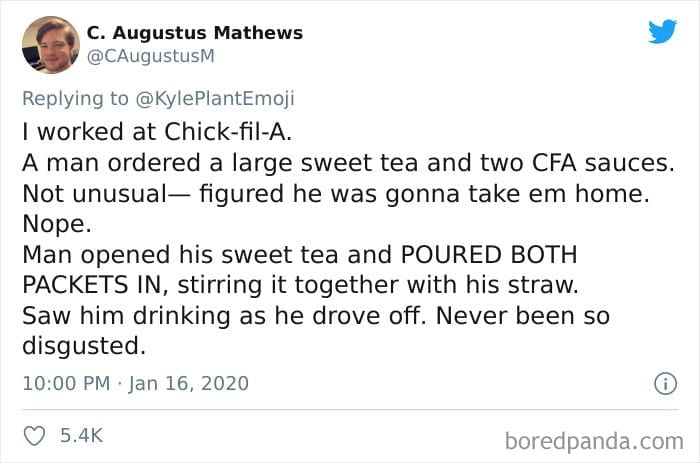 I never wrote down orders, but every once in a while, someone like this would just keep talking, and I had to get out my pen.

If you’ve spent time in food service and can remember a customer like this, tell us about their order in the comments!