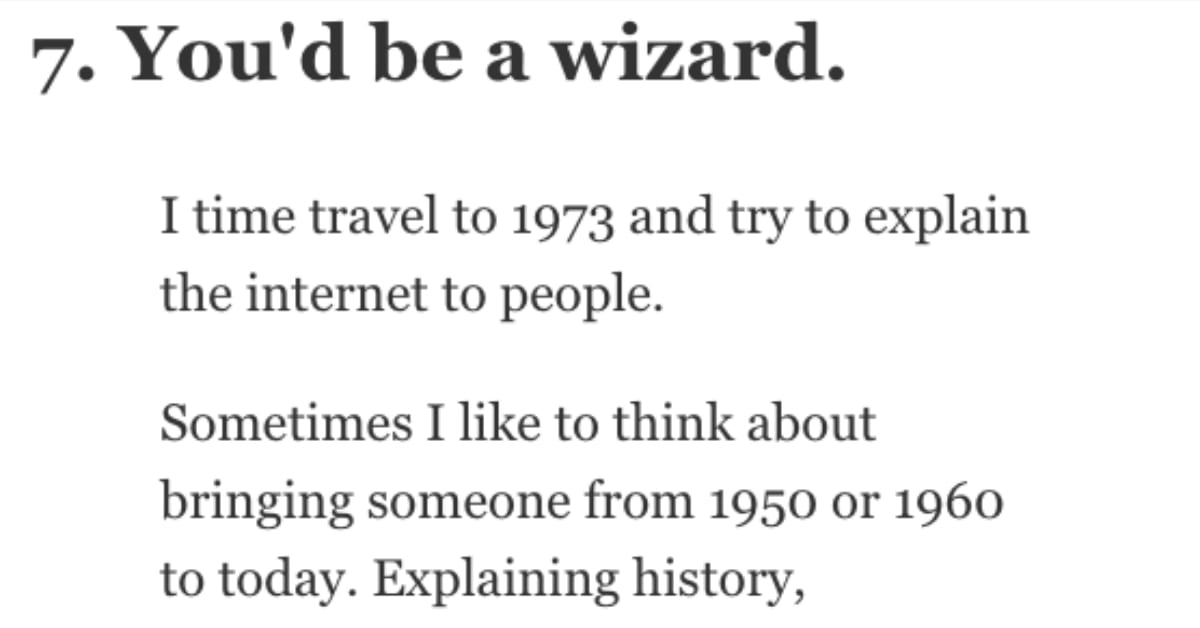 Creativity takes so many different forms, but for a large portion of the population (maybe even for almost everyone), it’s a necessary component for a happy life.

Whether you like to paint, or knit, or sing, or write – or maybe if consuming media is more your jam – we all need ways to let our minds wander into uncharted territory.

For some people, that means stepping into scenarios in their heads that they know will never happen in real life – but it fills up their wells to watch how it would play out, anyway.

These 16 people have some pretty interesting brains, and I am here for it!

Weird thing but what helps me sleep is imagining that I’m sleeping with a group that’s being hunted by (insert fantasy creature here).

But our party’s wizard has created an illusory safety bubble that keeps us warm, comfortable and hidden from our would-be foes.

15. Most of us could definitely get into this one.

Quitting my job with no notice.

I had some money saved up and had a small side business I was working on. My regular job totally sucked and was going downhill fast. I was due to work a 4pm -12 shift. I was out golfing and after the 1st 9 I would have to leave to get ready for work. I started to pack up to leave but noticed it was a beautiful sunny day, not too hot.

I was out having fun with my friends and realized you only get so many of these days in your life. So I picked up my phone, quit my job, lit up a joint and played 27 more holes of golf instead of going to work.

This was in May and I decided to just not work that summer. I had burned through my savings by September, but it was worth it.

imagine things I wish I said.

What I would do on a deserted island, like my survival plan.

The Gilligan’s Island idea of an uncharted desert island is no longer possible, thanks to Google Earth and GPS. But that doesn’t mean all islands are populated. Denmark has like a thousand islands or more (according to my Danish ex-girlfriend), but do you want to be on an island by yourself during the winter near Denmark? Same is true for Alaska, a ton of islands, but very harsh winters.

I’m also used to think about all the things I should have said. Monologuing in my head like if I was talking to them.

But for me it doesn’t help to sleep. On the opposite I always end up feeling like shit. Staring in the void like If I was just waiting for my time to come.

But the worst part is when one day you say the things you wanted to say and the result is not at all what you planned and you’re now in a even worse situation.

My only tip is : don’t come to fantasize that idea of you tellings those things. Because you can’t never be 100% that the things would have gone the way you thought they would have. (Sorry for bad English)

In middle school i would imagine that a portal would tear through my classroom and a group of uniformed mythological people would come out and would urgently request me by name and tell me that they really needed me and then they would whisk me away to some other world where i was their only hope in some ancient war.

Just so that everyone around me could wonder why i was so important. Over a decade later I’m writing a webcomic about it. Got about a hundred pages out. I’m deleting it now so i can redo it since now I’m a proper adult and not a broody 15 year old.

I dream about him a lot because he was the best friend I’ll ever have and I really fucking miss him.

It’s been a long time now since he passed away and I’m starting to forget things about him and it hurts my heart so much.

9. Some days that sounds pretty good.

I pretend I’m a potato buried underground. It’s so dark down there and the weight of the dirt comforts me.

8. A writer in progress.

I have a ~16 year fantasy world (not really written, mostly just back of my mind kind of escape) and I just expand on that for a bit. Really interesting thinking back on what I’ve brought up for it and how big/small it’s gotten.

At this point I’ve gotten to an anthology type stage where there’s a main story in the background, but a lot of mini stories being told to secondary and tertiary characters.

Mostly because the main character has been around for so long and gone through so many “realities” that this helps other people catch up and lets me go over what I came up with before but didn’t really expand on. It’s nice to be able to go back to that, but still keep everything alive and progressing.

I time travel to 1973 and try to explain the internet to people.

Sometimes I like to think about bringing someone from 1950 or 1960 to today. Explaining history, technology, etc.

Sometimes I imagine setting up a movie theater in the middle ages and showing the people of that era Star Wars episodes 1-6.

6. I could live there for awhile.

I’m living in an alpine cabin above the snow line, just me and a dog. Each day I cut firewood, each night I spend the evening watching the fire and drinking black coffee while the dog snores.

I usually go to the 1800s and bring a phone with me to show them what it does and blow their minds. And sometimes Leonardo da Vinci time travels to the current time and I’m tasked with showing him the world. I even figured out how we will communicate with each other (plus, he’s smart. He’ll have English figured out in no time I’m sure)

There is a portal to the modern day, so we can access to the internet. Plus, as a few people mentioned, if we have the technology to time travel, we probably can figure out a way to provide internet services. Bringing multiple phones would be a good idea!

4. Real life is never as good.

No shit, I used to envision that there’s global epidemic of some kind and the world has gone to shit, looting and whatnot, the government has collapsed and I have to be super quiet to avoid the upheaval outside.

3. If only this would come true.

I’m chilling in my back yard with my dogs when one of those metal suitcases you see in movies lands hard with a partially shredded parachute.

The impact is hard enough to break it open and rubber banded stacks of non-sequential circulated hundred dollar bills fly out all over the yard. Easily two or three million dollars worth.

There’s a dye pack with a gps but it malfunctioned and didn’t go off and isn’t transmitting.

I gather the money and wait.

Nobody ever comes knocking.

My income doesn’t fluctuate and no large purchases (houses cars) get reported, so I’m completely under the radar.

Eventually I’ve deposited and saved all the money from the case. I continue the practice with my regular paychecks I’ve kept in cash.

Eventually it’s all deposited, at which point I retire and live off the accounts.

2.  We all need to be prepared for the zombies.

the epidemic is zombies. Instead of trying to be still in bed I envision how my homestead will be set up and defended.

If you have an imaginary scenario you enjoy, share it with us in the comments.